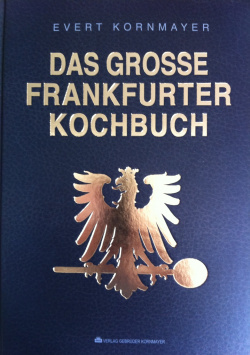 "If God loves him, he gives him an apartment and food in Frankfurt". With this quotation by Johann Hermann Dielhelm from the 18th century, "Das grosse Frankfurter Kochbuch" is introduced. Evert Kornmayer has captured his love for Frankfurt and its cuisine, which is revealed in this quote, very beautifully in his extensive recipe collection. In 21 chapters, the versatility of Frankfurt's specialities is demonstrated. It's not just the green sauce, ribs with cabbage and apple wine that pamper the Frankfurt palate. Surely, the herbs of the green sauce and apples appear again and again in many variations in the 240 recipes of the book. But overall Frankfurt cuisine is much more colourful and varied than you might think.

Kornmayer not only uses traditional recipes for his collection, but also spices it up with many modern kitchen classics. Thus one finds here beside courts from grandmother's time like pickled hand cheese or zander after kind of Goethe's aunt Melber and classics like Frankfurt Brenten or ladder evenly also contemporary variations green sauce ice cream or Riederwälder Curryfrikadellen. Whether appetizers and snacks, cheese dishes, soups, stews, pasta, poultry, sauces, cakes or drinks, the mixture of tradition and modernity makes this extensive collection of Frankfurt specialities a real treat.

Although the photos do not always do full justice to the taste of the dishes depicted, this only marginally clouds the reading and cooking pleasure. The recipes are presented in a clear and easily comprehensible manner, and important kitchen terms and units of measure are explained in the introduction. The whole thing is rounded off by a short trip through the culinary Frankfurt, its markets and festivals, as well as some important basic recipes, which can be found in the appendix.

The "great Frankfurt cookbook", very attractively designed with its gold embossing, has absolutely earned its name. This extensive collection of recipes for Frankfurt cuisine, compiled with a great deal of obvious passion, offers the right dish for every taste. Not only, but of course especially recommendable for Frankfurt hobby chefs!