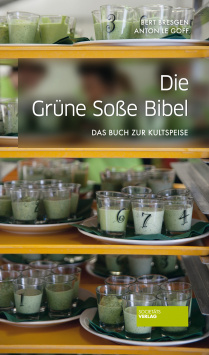 It is widely known that the Green Sauce occupies a very special position in culinary Frankfurt. The heated discussions that continue to flare up about the allegedly correct preparation or the proportions of the seven herbs are also an integral part of Frankfurt's "Grie Soß" culture. One loves this delicacy, one argues about it - and for seven years now it has been duly celebrated with a big festival. Initially, the event initiated by Anton Le Goff (alias Maja Wolff) and Torsten Müller was conceived as a unique event in the bread factory. But when this one evening was so well received, it became a seven-day festival for the first time in 2009, whose finale had to be moved to the Frischezentrum for capacity reasons. After this experiment could be booked as a complete success, the way of the festival to the city centre was obvious.

With the support of city councillor Markus Frank, the Roßmarkt was the perfect venue. But the big success did not want to come here in the first years. But meanwhile the Green Sauce Festival has become a fixture in Frankfurt's cultural calendar and the evening events are always completely sold out. In 2014, the seven herbs will be celebrated for the seventh time on seven days by seven restaurateurs each - a small anniversary perfectly complemented by the "Green Sauce Bible". Together with Bert Bresgen, who also writes cabaret texts for the festival, Anton Le Goff has created the perfect companion for all "Grie Soß" enthusiasts. In the book, the Frankfurt cult figure not only reveals a few secrets about the Green Sauce, but also lets the reader participate in his very personal, extremely amusing revival story, reviews the history of the festival and offers a short journey back in time to the times of Goethe or Hildegard von Bingen.

As at the festival itself, Anton le Goff has also gained prominent support for "The Green Sauce Bible". So some of the regular guests of the festival evenings may ponder as patron saints the Grie sauce over each of the seven herbs in rhyme form. When Bäppi La Belle intones an ode to the pimpinelle, Bode pays homage to Bach the cress, or Sabine Fischmann & Ali Neander wish the chervil to be the heir to the sprightly granny Bärbel, reading this book becomes a humorous treat. In addition to the seven patron saints, however, the Fleischwursthäretikerin Hilde from Bornheim, who is also an integral part of the festival, City Councillor Markus Frank and Lars Obendorfer from "Best Worscht in Town" may enrich the book with small contributions. A 7-herb language school, a list of all previous winners, a Green Sauce Knigge and a list of seven highlights from seven years in the festival tent also ensure that the entertainment value of the "Green Sauce Bible" is kept at a consistently high level.

However, a book about the "Grie Sauce" naturally also includes a selection of recipes. 21 favourite recipes of the festival fans crown the culinary side of the book. Whether Carobnara Grie Salsa alla Marino, Frankfurter Grüne Sauße Noodelsalat, Grüne Sauße Eis or Frankfurter Vegane Grüne Sauße - here you will find numerous suggestions to try out for yourself, which show this cult dish from a completely different perspective. And of course there are also suggestions as to what is best to drink with the green sauce. Nothing can stand in the way of a culinary delight after reading the book. And for those who want to lift the spirits, the book also offers six atmospheric songs about the Green Sauce.

"The Green Sauce Bible" is a very amusing book, which is not only fun, but also offers some tasty suggestions and interesting details around the topic "Grie Sauce". A lovable bow to the cult food and a very nice companion to the popular festival - and therefore a must for all Green Sauce fans. Absolutely recommendable!