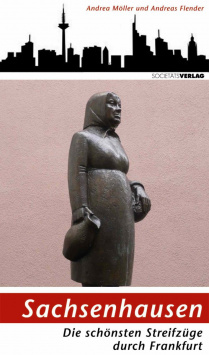 The most beautiful expeditions through Frankfurt - BORNHEIM & SACHSENHAUSEN

The Societäts Verlag starts a new book series in which each volume is dedicated to a Frankfurt district, which is presented in detail in words and pictures. "The most beautiful rambles through Frankfurt" takes a close look at history, culture, leisure activities, culinary delights as well as celebrities from the individual districts. It starts with Sachsenhausen and Bornheim, in autumn 2011 Höchst and Nordend will follow.

Sachsenhausen is probably one of the most famous districts of the Main metropolis, which is probably due not least to the many atmospheric pubs, but also to the numerous museums. Andrea Möller and Andreas Flender take the reader on a beautifully illustrated foray through Sachsenhausen, which begins with a short excursion into the history of the district. The text never gets lost in details, but provides the most important information on the transformation from arable land to an entertainment district, on important sights such as the local railway station or the Sachsenhäuser Warte and tells how the devil himself was outwitted on the Old Bridge.

The book also presents the most beautiful sights of Sachsenhausen, including the Goetheturm, the Henniger Turm with its brewery, the Steinern Haus and the Dreikönigskirche. The reader is then invited to get to know the cultural institutions of the district, such as the music venue Südbahnhof, the Harmonie Kino, the library centre or, of course, the museums on the Museumsufer. The Städel, the Liebieghaus, the Film Museum, the Museum of World Cultures or the German Architecture Museum are of course not to be missed. In addition to short descriptions of the various institutions, the book also offers important information such as opening hours, address or Internet address.

Whoever prefers the countryside will get his money's worth. The two authors invite you on a tour along the riverside promenade, take a look in the Stadtwald, where the beautiful Stadtwaldhaus is also presented, or take a break at the Jacobi pond before following in the footsteps of the famous poet on the Goethe hiking trail.

Shopping possibilities, the most beautiful places to stop for a bite to eat, whether a classic apple wine tavern or a modern bar ambience, the most popular district festivals and leisure activities, but also curiosities and comedy about Sachsenhausen are presented here in an informative and entertaining way. The fact that such a colourful, traditional and culturally diverse district also had and still has a few prominent residents offers material for another chapter worth reading.

After 143 pages it becomes clear how much Sachsenhausen unites tradition and modernity and offers its visitors an extensive range of art and culture. This is a good place to live and enjoy - something this book really makes you want!

Bornheim is clearly characterized by the Berger road, which is more than three kilometers long. Here life pulsates in many different ways. From small cafes to traditional apple wine bars to the most varied shopping offers, there is hardly anything on Berger Strasse that is not there. But "Bernem" is much more than just Berger Strasse, as Bernhard E. Ochs' district guide proves. Beginning with the probably most important tip, not to visit Bornheim by car if possible, and the amusing presentation of Homo Bornheimiensis, Ochs also sets off on a journey into the past. On only 12 pages an entertaining and informative picture of Bornheim's history is drawn, crowned by the legend of the "Rundum-Bild" of 1825/50.

Places of interest such as the clock tower, the Bürgerhaus Bornheim or the Fünffingerplätzchen, the beautiful parks such as the Günthersburgpark or the Ostpark, but also the various possibilities for shopping and dining are presented to the reader in a clear and informative manner, enriched with numerous appealing illustrations. And finally, the author takes a close look at the Bornheim club world, the festivals and district celebrities such as Vicky Leandros or Louise von Rothschild.

The start of the "Most Beautiful Rambles through Frankfurt" can thus be described as absolutely successful. The books in a handy format invite you to (re)discover the city and make you want to take advantage of the multifaceted offers of the city districts. Informative and entertaining, as a good district guide should be, this promising series presents itself, whose continuation hopefully won't be long in coming. The other districts of the Main metropolis are also varied, rich in culture and sights. Recommended for Frankfurters as well as for visitors who want to get to know Frankfurt with all its facets.