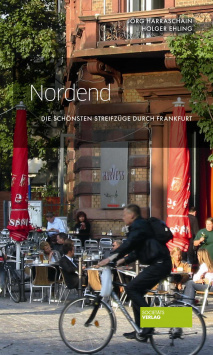 The most beautiful expeditions through Frankfurt: Nordend

After the very promising start of the district series "Die schönsten Streifzüge durch Frankfurt" with the first two volumes on "Bornheim" and "Sachsenhausen", the format enters its third round with a visit to "Nordend". The structure of this volume also remains true to the line of its predecessors. Thus Nordend, its inhabitants and its history are briefly presented. Already here it becomes clear that Jörg Harraschain, one of the two authors of the book, has lived in Nordend for forty years and loves his district and the other Nordendler (or Nordender). Interesting facts, such as the difficulty of determining the exact border of Nordend, are mixed with winking self-irony, which makes reading the booklet a great pleasure.

A walk leads through the sights of a district that is especially popular with young families and artists. From the Hessian Monument via the lower Berger Strasse, past the University of Applied Sciences and the German National Library to the Hessian Radio and back at the main cemetery to the Holzhausen quarter with the picturesque Holzhausenschlösschen, this nice walk leads. Here, too, the information is conveyed in a compact form and adorned with numerous illustrations.

Finally, the book allows the reader to take a trip into the parks of Nordend, such as the Chinese garden, before showing the various possibilities for shopping and stopping for refreshments. Here the legendary Stalburg Theatre and the no less legendary ice cream of Christina are just as important as the Nibelungenschänke, the Café Größenwahn, the Terra Nova with its delicious pizza, the children's bookstore Tatzelwurm or the Ypsilon bookstore on Berger Strasse. Although there are no real surprises for Nordendler here, you will be reminded at some of the locations presented where you wanted to go again long ago.

Festivities and leisure facilities are the focus of the penultimate chapter. Here the two so different cinemas of the quarter, the multiplex CineStar Metropolis and the lovable movie theater Mal Sehn`, belong to the highlights, as well as the unusual museum EXPLORA, which is not only because of the many great 3D pictures and participation actions absolutely worth a visit. The popular festival on Unteren Berger Strasse and the open air theatre STOFFEL are also presented here in more detail.

Last, but not least, the book focuses on the prominent inhabitants of Nordend. Joschka Fischer, "culture godfather" Michi Herl, the unforgettable Liesl Christ, writer Stefanie Zweig or travesty artist and dance school director Bäppi la Belle are just a few of the well-known names associated with Nordend that show that this district has a very special flair. Culturally and culinarily just as versatile as its inhabitants, green and yet very close to the city centre, these are all factors that make Nordend so popular. Jörg Harraschain and Holger Ehling have managed to convey exactly these aspects of life in Nordend in their book. And this is exactly what makes this foray through Frankfurt: absolutely recommendable!