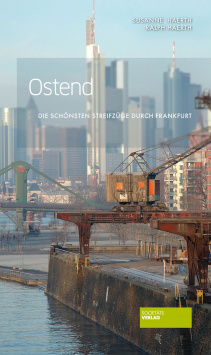 The most beautiful expeditions through Frankfurt - Ostend

The series "The most beautiful expeditions through Frankfurt" enters the next round. After Sachsenhausen, Bornheim, Höchst and Nordend, the latest band will head in the direction of "Ostend". Ralph and Susanne Haerth present the history of the district here, invite you to take a tour of the quarter, stop at the green areas, the various cultural institutions and, of course, the zoo. They show where you can shop and stop for refreshments in Ostend and which well-known personalities this part of the city has produced.

At first glance, Ostend is truly not the most beautiful quarter of the Main metropolis. But the book makes it clear that it is a very versatile district, which is also currently undergoing a great deal of change. The construction of the new seat of the European Central Bank, the new Main Bridge East, which will connect the Ostend with the Sachsenhausen Deutschherrenufer from 2013, or the new Hafenpark will not only significantly change the image of the Ostend, but also its significance for the city in the coming years.

However, the quarter already has more to offer than it may initially appear. From the Ostpark to the Literaturhaus to the Union, from the Riederwald to the Zoo to the Mousonturm, no matter whether you are looking for recreation, shopping or culture, Ostend offers variety in every respect.

A name appears in almost every chapter of the book: Gref Völsings. The traditional butcher's shop with its beef sausage, which is popular beyond the city limits, is one of the most renowned companies in eastern Frankfurt. And so it is no wonder that the butcher's shop on the Hanauer Landstrasse is one of THE culinary meeting places of the region. The unbroken popularity of Gref Völsing's sausage and its significance for the district must, of course, also be acknowledged in a book about Ostend.

The latest volume in the "Most Beautiful Strolls through Frankfurt" series continues the informative and entertaining character of the first volumes and makes residents of other parts of the city in particular want to rediscover the Ostend with completely different eyes. Recommended]