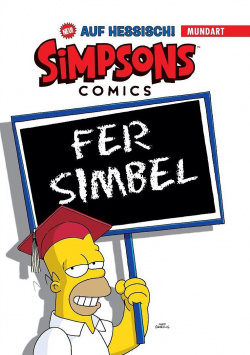 The Simpsons" have been an absolute cult for over twenty years. The more than 500 episodes that have been created so far are constantly rotating on television and there is actually no day when fans can't visit their yellow friends from Springfield. After all these years, the abundance of TV episodes, accompanying books, comics, merchandising and a feature film, there is hardly anything left that does not exist of the yellow family. But in fact, there is now a wonderful opportunity, especially for Hessian fans, to get to know "The Simpsons" from a whole new perspective. The dialect comic "Die Simpsons fer Simbel" combines typical Simpsons humor with the very special Hessian charm, which at first seems a bit strange, but in the end works really well.

When Homer goes to Moe's for a "Schobbe" drink to recover from work in the "Atomkrafwärk," when Lenny, Carl, Homer, and Barney open their posh bar "The Schobbepetzer." or Homer wonders while watching TV why "de Scrachy is still uff de Fies, when em de Itchy has blown off de Kopp with ere Heggescher", then really no eye remains dry. What Frankfurt's cult bard Bobby von Schwanheim has extracted from the cartoon is simply great. He has not only translated the dialogues into Hessian. Also shops, posters or advertisements sound a little different in this version than in the original.

So it says for instance in the "Kwick-I-Mackt" above the counter "I usually want to, but you have to be nice to me", in an ad someone is wanted who "dabbisch wie Marjoram" and in room C of the research hall "Neurokram un Kopp attempts" take place, while "Kärrnschbald attempts un gefährlisch Zeusch" are carried out opposite. Other highlights include a "Charlie and the Chocolate Factory" dream sequence, in which Homer can sing a little anthem to Ebbelwoi.

The comics of the "Simpsons" are generally quite amusing, but never really come close to the humor of the series. With the dialect version, however, it looks quite different. As a reader, you can often laugh so heartily here that it can happen that you are "taken by the Schnuut". A must for all who are not only fans of the cult family, but also love the Hessian dialect at the same time. Absolutely recommended!