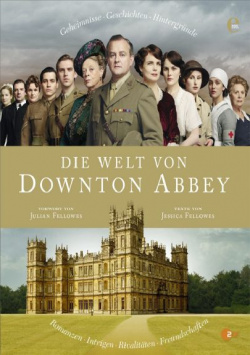 The world of DOWNTON ABBEY

With "Downton Abbey" the celebrated screenwriter Julian Fellowes ("Gosford Park", "Young Victoria") has created one of the most successful and qualitatively best British TV series of recent years. Even though the stories of the noble Crawley family and their servants at the Downton Abbey country estate are not much more than a noble soap opera and the basic idea is clearly reminiscent of the TV classic "Das Haus am Eaton Place", the great scripts, the outstanding actors and the equipment from the series make something very special. It's a rousing world, into which you as a spectator are all too happy to be drawn. And this is exactly what Jessica Fellowes, the niece of the creator of the series, makes possible for all fans of the series with her entertaining, informative and beautifully designed accompanying book "The World of Downton Abbey".

The book introduces the characters of the series in different chapters and takes a look behind the scenes. But the book is much more than a typical episode guide or a simple making of book. In fact, Fellowes also looks at the historical backgrounds of the first two seasons and offers a look at social customs and positions of the time around the First World War. She emphasizes how much importance the makers placed on the authenticity of clothing, equipment, but also on language and social interaction. In addition to numerous pictures from the series and photos from the set, there are also some concept drawings, but also photos, postcards or newspaper clippings from the early 20th century to see.

Both in terms of content, including the design, the book more than meets the standard of the series. Jessica Fellowes has created a comprehensive and visually compelling companion book to her uncle's award-winning series that appeals to both readers interested in the making of the series and those who simply want to learn more about the historical background. A real glossy product that can be warmly recommended to every fan of this wonderful series! Absolutely recommended!