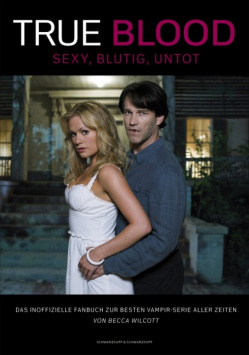 The unofficial fanbook for the best vampire series of all time

With "True Blood" Allen Ball ("American Beauty", "Six Feet Under") has filled the meanwhile sucked out vampire genre again with fresh blood. The adaptation of the novel series by Charlaine Harris about the telepathically gifted waitress Sooki Stackhouse from Bon Temps, Louisiana, who falls in love with the 173-year-old vampire Bill, is extremely weird, bloody, sexy and simply damned entertaining. Of course, the series itself should not necessarily be taken 100% seriously, otherwise some elements seem almost ridiculous. But since the entire production always presents itself with a pleasantly self-ironic wink, at least real "True Blood" fans should be able to recognize and fully enjoy the high fun and entertainment factor of the series.

Becca Wilcott has taken a closer look at the first two seasons in an unofficial fan book. On the basis of numerous interviews from magazines, TV shows and online articles, masses of picture material and many other collected information, a quite good companion book to the series was created, whose unofficial character in many moments is not at all noticeable. For example, the pictures are primarily promotional material and not, as is the case with many other "fan books", paparazzi pictures or photos taken by fans. Besides the many portrait photos of the actors, the pictures of the atmospheric sets on which the series is shot are especially worth seeing.

The episode guide through the first two seasons is also entertaining and comprehensive. In addition to the content of the individual episodes, small details, the most beautiful scary moment, the locations or the songs determining the respective episode title are also dealt with. An analysis of the opening credits and detailed actor information should also please every fan. In addition there are two exclusive interviews with the actresses Kristin Bauer (Pam De Beaufort) and Patricia Bethune (Jane Bodehouse) and an entertaining collection of infos and pictures, which give a good overview of the beginnings of this cult vampire series. Especially for an unofficial fanbook "True Blood Sexy, Blutig, Untot" is really well done. Recommended!