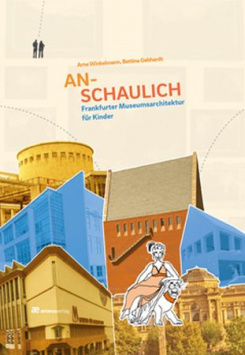 After "Himmelstürmend", in which children were brought closer to the skyline of Frankfurt, and  "Überspannend", in which the bridges of the city were discussed, Arne Winkelmann and Bettina Gebhardt dedicate their third architecture book for children to the colourful museum landscape of Frankfurt. They have selected 19 examples from the 60 or so museums and exhibition halls, although they focus less on the museum's offerings than on the special architecture of the buildings.

Whether Schirn, Städel, Goethehaus, Architekturmuseum, Historisches Museum or Museum für Kommunikation are concerned - the buildings are presented to young readers in a factual, concise and easily understandable manner. In this context, architectural style, architects and any special features - such as the house within the house in the Architekturmuseum or the interplay between the museum building of the Museum Angewandte Kunst and the adjacent Villa Metzler - are mentioned. Some illustrations and brief information about the museums themselves can also be found on a double page.

Ariadne and her Panther will lead you through the book. As a sculpture, they were the only exhibit in Frankfurt's first public museum building, the Odeon, which until recently was home to a popular club. Ariadne reveals little secrets to the readers again and again and asks a question on each double page about what was to be read here. This allows the children to test their knowledge right away, giving the book not only an informative but also a playful character.

As the two predecessors, "Illustrative" also manages very well to bring children closer to the special architectural landscape of the city of Frankfurt am Main. At the same time, the book makes you want to discover the museums, which often also have a special offer for children. But there is also this time a deserved one: Absolutely recommendable!