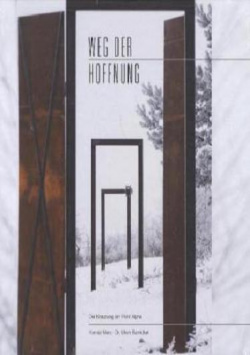 Way of Hope - The Way of the Cross at Point Alpha

The Point Alpha is a former US observation post at the Hesse-Thuringia border. This place was once one of the hot spots of the Cold War, but today a museum commemorates this dark chapter. In addition, the Point Alpha Foundation commissioned the artist Ulrich Barnickel to create an art project to commemorate the non-violent resistance to communist dictatorships. Barnickel distributed fourteen sculptures over a length of about 1.5 km, thus creating the impressive "Path of Hope". Arbitrariness, oppression, coercion, horror, solidarity, compassion, violence, consolation, humiliation, degradation, murder, despair, sacrifice and hope are the themes that the artist expresses in his sculptures.

The photographer Konrad Merz documented the conception, creation, structure and effect of the sculptures in "Weg der Hoffnung". Texts are handled rather sparingly. There are some accompanying texts, but first and foremost the photos are allowed to speak in the illustrated book. For the interplay between sculptures and their surroundings, which changes noticeably with the seasons, no big words are needed. The artist's intentions become tangible through the photos alone. Certainly, this work of art can only unfold its full power when one stands directly in front of it and the symbiosis of the significance of this place, of nature and of the sculptures can have an effect on oneself.

However, the photos by Konrad Merz also succeed very well in capturing the special atmosphere on the "Path of Hope". But also his paintings from Ulrich Marnickel's studio, from the sketches of the sculptures and finally from the visitors viewing the sculptures make the book a very special work. The reader can thus visit a place where the past must not be forgotten in order to maintain hope for a peaceful future. The fact that the artist with his sculptures and the photographer with his pictures can bridge the gap between the dark past and the hopeful future makes reading "Weg der Hoffnung" an intense and moving experience