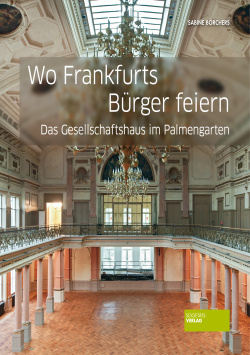 Where Frankfurt's citizens celebrate - The Society House in the Palm Garden

The Society House in the Palm Garden was closed to visitors for ten years. But since autumn 2012, the traditional building has opened its doors to the public again and, after extensive renovation, is finally shining again in all its historical splendour. The renovation and reopening proved to be an excellent opportunity for Sabine Börchers to get to the bottom of the architectural and socio-cultural history of the Gesellschaftshaus, much of which has simply been forgotten over the decades. With the help of eyewitness reports and extensive research at the Institute for City History, the Palmengarten Archive and the Office for Monuments, the book "Where Frankfurt's Citizens Celebrate" was created, which has become much more than just a historical portrait of a building. Rather, it has also become a book about the eventful history of the Palmengarten and the entire city of Frankfurt, with many interesting details and numerous illustrations from almost 150 years.

The individual stages in the history of the Gesellschaftshaus, from its first conception to the original building, which was largely destroyed by a large fire in1878, to its reconstruction, various additions and conversions, its functional transformation, the confiscation by the Americans during the period of occupation to the prominent visitors who made the Gesellschaftshaus known far beyond the borders of the city. Also the necessary renovation, which failed again and again because of the necessary money and finally the closure, which put the house into a long sleep, from which it is only now awakened again, are explained in the book.

Sabine Börchers manages very well to present this ramble through the story in such an exciting and compressed way that it never seems dry or boring. At the same time, however, the feeling does not arise that the author is ticking off events too superficially or hastily. The interesting, entertainingly written texts and the numerous accompanying illustrations make it clear that much research has gone into the development of the book.

It is really exciting to learn how the Palmengarten and the Gesellschaftshaus have changed from a place for the higher classes to a place for all Frankfurters, that in times of great famine the areas were used not so much for exotic plants but for the cultivation of vegetables, what fights there were when the contracts for the construction or conversion of the Gesellschaftshaus were awarded, or how the area was used by the Gis during the American occupation. A beautifully designed and attractively written book in which city history is reflected in the eventful history of a single house. Absolutely recommended!