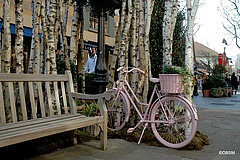 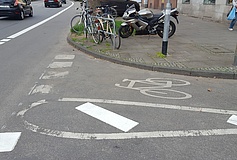 Spring is here and I have such a desire to exercise, you won't believe it. Do you guys feel the same way? True, there's no shortage of exercise because I have to fulfill my dog-owning duties year-round ;-) But with this weather, I've been dusting off the bike now too. Is your bike ready for spring yet? If not, check out <link https: www.frankfurt-tipp.de insidefrankfurt s shopping so-radelt-es-sich-wie-geschmiert-der-fruehjahrscheck-fuers-zweirad.html _blank>My post about the spring check.

Are you passionate cyclists too? After all, I just got back from vacation in Holland - you guess what's next? Yes, the Dutch have some interesting ideas ahead of us when it comes to bicycle traffic: for example, an underground car park in the city centre of Maastricht also provides parking for bicycles. The city of Frankfurt has been offering a similar parking space at the Konstablerwache for some time now, just above ground.

By the way, on May 1 the nationwide campaign <link https: www.mit-dem-rad-zur-arbeit.de hessen _blank>"Mit dem Rad zur Arbeit", or "MdRzA" for short, starts. From May to the end of August, we are to turn the way to the office into a personal fitness program. Those who have cycled more than 20 days can even win great prizes! In the meantime, one in six people use their bike to get to work.

But is Frankfurt already on its way to becoming a cycling metropolis? In any case, some residents think that traffic should be more oriented towards cyclists in the future: With an eight-point plan based on the model of Amsterdam and Copenhagen, the initiative "Radentscheid" is fighting for a more bicycle and environmentally friendly city.

Since April 4, it has been collecting signatures for the idea of creating more bike lanes for more safety in traffic. And commuters are also being considered, with the desire to connect bike lanes from the facility ring to regional bike lanes. Although I like the idea in principle, I wonder where in a city as narrow as ours the space for 2.30-metre-wide lanes will come from. For a taste of the conflicts of interest between pedestrians, cyclists and car owners over what little space there is, take a look at Bockenheim. There the city had <link https: www.hessenschau.de panorama _blank>painted four (!) bike lanes on the pavement.

Bicycle is the future

But even if some of the demands of the initiative do not sound realistic to me, then especially the short distances in Frankfurt are and remain a strong argument for more cycling. And in small steps, some things can certainly be made more bike-friendly.

Which brings us back to parking spaces. Designated parking spaces, for example, are a signal to me that the bicycle is a serious substitute for the car as a means of transport. I like the fact that the city has taken on the issue of "rental bikes", which have been standing around madly lately, or should I say; clumped into a chaotic heap? I also like the <link https: www.frankfurt-tipp.de ffm-aktuell s ugc neue-rampe-fuer-radfahrer-an-der-niederraeder-bruecke.html _blank>new ramp at Niederräder Brücke. By the way, if you want to rent a bike for yourself or your visitors, you can find everything you need to know about the rental service here at <link https: www.frankfurt-tipp.de ffm-aktuell s ugc fragen-und-antworten-zu-leihfahrraedern-in-frankfurt.html _blank>Frankfurt-Tipp.

Till then, I cycle to work on side streets because I feel safer there than, say, on the Anlagenring - and on weekends I enjoy doing kilometres along the Nidda. But if you want to experience the ultimate bike ride, check out my post <link https: www.frankfurt-tipp.de insidefrankfurt s shopping rund-um-frankfurt-mit-fahrrad-und-faehre-die-ultimative-radtour-ueber-den-main.html _blank>"Frankfurt, bicycle and ferry".

Do you ride your bike to work? How do you imagine the traffic of the future?