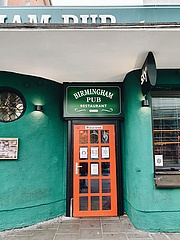 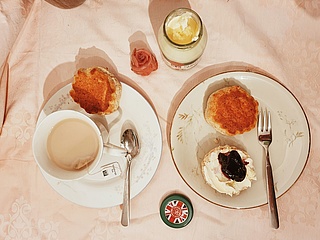 Brexit or no Brexit - relations at the European level are now severed, but we can take comfort: after all, those who leave never quite leave.

A piece of everyone remains behind. So too of our British friends, who fortunately remain with us on a local level. The close ties between Frankfurt and Britain have left their mark on the Main with us.

I'm sure you'll find all of them in many of the cultural institutions to be found in Frankfurt. Speaking of art, language and culture - today I have a whole series of "Fun facts and tips on culture and enjoyment" for you.

I also allow myself a personal anecdote to the occasion: I studied English and learned my first words like "school" from my grandpa. He in turn had picked up his knowledge from, you guessed it, British soldiers. (I grew up in the English occupation zone, while Hesse was American). So my love for the island has deep roots, for many years I have had the pleasure of teaching English as a foreign language to adults at the Volkshochschule here in Frankfurt.

Over the years I have collected the best tips from my Scottish and English colleagues, from A for ale to E for shopping and T for theatre.

Great Britain is moving away. What remains for us on the Main is the typically dry English humour. The "Birmingham" pub, for example, entices its guests with the slogan "Hungry? We got food. Thirsty? We got alcohol. Lonely? We got alcohol". The pub is, after all, already a bit of an institution and has been in our city for nearly twenty years.

FUN FACT No. ONE

How does the pub get to name itself after the UK's second largest city? Simple. U4, 6 and 7 users know more, after all the local RMV has been transporting its passengers from A to B in a "Birmingham train" for a while now. The printed wagons are a gesture to the English city to mark the fiftieth anniversary of the partnership between Birmingham and Frankfurt.

50 years! Who would have thought. The city is well worth a visit and is known as the "Venice of the North" because of its many small canals. If you want to find out more about organised civic trips to the twin city by the City of Frankfurt, email info.international@stadt-frankfurt.de.

What would England be without the aristocracy's controversial fox hunts? The West End pub lounge harkens back to that tradition with its name, The Fox and Hound.

The bar's offerings include (English) football, whiskey or traditional English cuisine, of course.

Parents take note Every first Sunday of the month, the pub invites you to a "Family Breakfast" from eleven to fifteen o'clock.

Although there is a widespread opinion that English food leaves much to be desired: There's nothing wrong with clotted cream, scones and jam with afternoon tea. It doesn't get more English than this.

The ingredients don't even have to be ordered awkwardly on the internet, but can all be had in Oeder Weg.

To be more precise, in "A Taste of Britain". Everything that man gets to know during a stay in England and misses after his return.

The Scots, as you know, have a lot of martyrs to boast about, so they're tough.

That's the only way I can explain why the locals invented "fried mars bars". Angus steak sandwich, okay. Sheep stomach? We have Saumagen, which everyone knows since Helmut Kohl. So we can't say anything against that now. But deep-fried Mars bar? R-E-S-P-E-K-T.

Bagpipe music is not everyone's cup of tea, after all.

But let me assure you that the typical sounds of the bagpipes sound wonderful as you wander the medieval lanes of Edinburgh doing so.

Friends of Scottish music, bagpipes to be more precise, will find like-minded people at the "Scottish Country Dancing Club."

English films are either played at the Metropolis at the Eschersheimer Warte. The international theatre as well as some independent cinemas like the Mal seh'n for instance or the Harmonie are good places to go. You can find current movies here on Frankfurt-Tipp.de

The English Theater is where friends and colleagues of mine work, with whom I was on stage together. And that's with the amateur theatre (Frankfurt English Speaking Theatre/FEST) - not to be confused with the professional ensemble at the Gallusanlage.

Playgoers will find great contact with English-speaking expatriates from the UK, but also from all other English-speaking countries at FEST Frankfurt. Chairman Jeff is a great, easy-going American.

But back to the Gallusanlage. The English Theatre's plays immerse you right into British culture. For example, the play about a murderous barber from Fleet Street, where English media used to be traditionally located, awakened moments of longing with many memories of visits to London.

The actors are excellent and established, whether in the UK or the US.

Two streets are named after English cities: Coventry and Birmingham. Both can be found in Nied. No street, but a path is dedicated to Hessian line Battenberg.

In England also known as "Mountbattan-Windsor", scrawl another "Archie" in front of it and you guess who we are talking about? The English royal family is closely connected with the Hessian branch. Allegedly, the English Queen herself, when she was still a young heir to the throne, carved her nickname "Lilibeth" into the window of the castle during a visit to her German relatives.

So the monarchy continues to hover over everything in the kingdom, and we're sticking to the motto: Keep calm and drink tea.

Are you planning a trip to the UK post-Brexit, or have you even traveled to the country? Do you know where Queen Elizabeth II carved her nickname in Hesse?

send by e-mail
print
What helps against the January blues?
If I were a fool of Frankfurt - The fifth season in Frankf ..