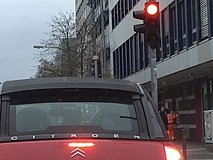 Edel sei der Mensch, hilfreich und gut] - that's so easy to write on the calendar. But when someone cuts you off in the morning in rush-hour traffic or the neighbour generously lets me share his taste in music again at two o'clock in the morning, then being good looks quite different. Whose mind doesn't occasionally boil over when there's a steady red light in traffic, huh? Life in the city is full of little excitements, full of impositions that drive the blood pressure up to 180, so that, strictly speaking, I could often save myself the espresso. How liberating then is such a little, mean swear word - let loose at the right time - we all know how important mental hygiene is these days, don't we ;-)

What we also know is how conducive to public togetherness language is. The many "Eingeplackten" in Frankfurt, as we newcomers are called - attention: here was already the first vocabulary of today's topic - can only really feel at home, if it works with the communication, that is: with the local words!

And what does one learn in every language with pleasure and mostly first? Correct! Curse words. The universe, or more precisely, a bookcase, has given me "Das Hessische Schimpfwörterbuch". For all of us, I have now leafed through it a bit, so that in the future I can eloquently and adeptly stand up to every nasty right-of-way taker with "lauter beesen Wörtern". (Which, of course, doesn't mean that born Frankfurters are all right-of-way takers. Not at all ;-) But a little dialect does make an impression - even the inexhaustible Mr. Goethe thought so when he said: "Every province loves its dialect, for it is actually the element in which the soul draws its breath.")

*Taking the right of way and also car license plate "FB"? (I have a friend there, she drives briskly, but exemplary!) Popular swear word: for stubborn Wetterauer, so the region around Friedberg "Berzche"

* It creeps once again with felt five kilometers per hour over the Alleenring? That's definitely a "lahm Ent", but maybe also a"Hutsimbel".

*Not invited to your neighbour's party, but robbed you of your night's rest? "Ablescher" or "Grissel" - once briefly stuck to the door of the dear, but not very pleasant neighbour :-).

* On the train, a supposedly well-meaning fellow human being holds open the train door, so that the door is first blocked, then the driver has to walk from the very front of the carriages to the end to unblock it, while all the passengers squat on the train and can't get off the spot? I guess that was a "Eumel" - a somewhat stupid person.

* All the garbage cans are overflowing in the park again? Has a "Ilmedritsch" possibly gone astray at the waste disposal service?

* The colleague is annoying with her detailed questions? Krimmelkacker. One who always hairs on his point of view in meetings falls into the genus"Kribbel" and of course I am happy every day anew about arrow-fast train connections in Frankfurt rush hour, also known as "Tranfunzeln".

Which Hessian or Frankfurt words do you know and like?