Frankfurt in August - 4 spectacular tips for the Museumsuferfest 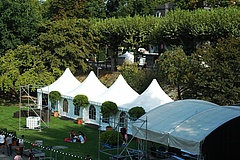 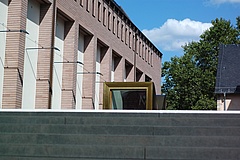 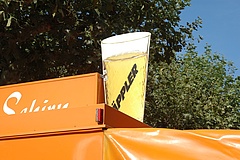 August in Frankfurt affords a fireworks display of festivals and street parties. So he's really letting it rip at the end of the summer. And why not? We can live indoors soon enough. Even if I'm certainly not a friend of the heat, I really enjoy summer evenings.

So a festival with wine delight and singing makes me immediately revel in the dolce vita feeling. Around the corner from us, a neighborhood has been successfully inviting people to a small street party for years. Home-baked cakes and a small flea market make sure that people meet in a relaxed way, who otherwise only greet each other when parking or in the entrance of a house.

Am Mainufer celebrates Frankfurt itself

Quite what fine and in the city everywhere noticeable, but awaits us this weekend with the Museumsuferfest. For this, the Schaumainkai will now also be closed for cars.

This remains traffic-related already exciting. One or the other might have had to take the detour via the Untermainbrücke?

Bumper to bumper. By the way, there will be no extra parking spaces on the occasion of the festival! Public transport is advised. With the predicted temperatures, cycling is much more fun anyway.

The FAZ calls the Museumsuferfest "Frankfurts Fest der Feste" (Frankfurt's festival of festivals) and, as we all know, it doesn't tend to exuberance ;-) 25 museums take part, stages, actions, culinary - it's like a showcase of life here on the Main, I think.

On one corner, the music stages were still being hammered out on Thursday, while the Brazilian and French delights were already ready for their visitors.

The Äppler stand had also been laundered ready, the ribs lined up to quench thirsts.

What is actually the idea of the Museumsuferfest?

The idea was originally to make it easier for all of us to step into the exhibitions. To soften the fear of contact when it comes to art. The idea can probably only be called a success, because in the meantime the Museumsufer has turned into one of the world's longest strolling miles.

The Museumsuferfest is a celebration of superlatives

And what all is on offer: 16 stages! 550 (!) individual events! 25 museums! Around one and a half million guests over three days are expected on the Main! To make it easier for you to choose, I have sorted out where my personal favourites are hiding. And by the way: All exhibition venues are of course always an excellent idea for rainy days, Sundays and other days for the rest of the year!!!

The especially nice? Even museums that aren't right on the shore are participating in the fest.

Spectacular of Bibles, Börneplatz and Balls

&middot; Because, where can you find the longest Bible in the world? In the Bible House! (1.7 kilometers long) Don't believe it? Then best convince yourself!

&middot; The Eintracht Frankfurt Museum is located directly at the Untermainkai near the newly renovated Leonards Church, which is now really a sensation.
So the opening of the church, I mean.

Of course, Eintracht is always good for spectacular things too! ;-)

The renovation of the Leonhardskirche brought to light one fantastic excavation after the other. "Treasures from the rubble" date back to the early 13th century. Someone says again, Frankfurt has only ugly and new-fangled things to offer! ;-)

So whoever finds the hustle and bustle on the waterfront too much for moments, may enjoy a choir and organ concert in the church instead.

&middot; My personal top favorite is the new History Museum, on whose steps the grand opening will also be held. Beginning Friday at 5 p.m., visitors can then enjoy a variety of musical performances and one of the many museums. And who has ever heard of the sensational find, the Stauferhafen? The quay shows the course of the Main until 1333!

&middot; Another highlight that I do not want to miss is the Jewish Museum. At Börneplatz there is the rare opportunity to get to know the cemetery at Börneplatz.

Or how about writing your own name in Hebrew? Children and adults can also design buttons and cloth bags individually according to their own ideas.

What are your highlights for the Museumsuferfest? And do you have a favorite August festival?

send by e-mail
print
Is Frankfurt finally bike-friendly?
The Alte Gasse - Is this Frankfurt's most exciting street?