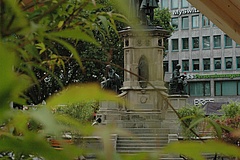 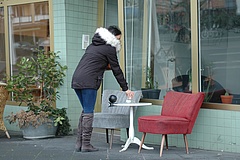 What would be your answer to the question about Frankfurt's most beautiful square? When the rain is whipping against the window panes in January? At home? In the living room? The sofa? Seems obvious given the storm, hagen and rain, doesn't it? :-) I, too, consider my sofa to be the most beautiful place in town. While the storm tears at the trees, people live on the couch as they should: Netflix without end, chips, wine, singing and debates - you name it! An inviting place, which deserves this name, lives from the exchange or also from the quietness, which it offers.

To enable us Frankfurtians to shift our livable life outside after the storm, city officials have already thought about the "good rooms": True to the motto: Frankfurt's places should become more beautiful. Not that we only have ugly squares. Not at all. The Friedberger Platz is, in my opinion, not necessarily the most beautiful in the city, but certainly the most crowded at the weekly market. City officials seem to like the idea of the weekly market, as it should also liven up the new neighborhood square at Friedberger Warte.

Whether the plan works remains to be seen - after all, the problem child "Arnsburger Platz" has gone down the drain with a weekly market. On better days, just two traders set up their stalls on the wide, empty space. The employees of the ECB could not be lured over for their lunch break. So for the time being, the area remains ugly to look at, like only the Konstablerwache, which is closely followed by the Hauptwache in my personal hit list of the ugliest places in Frankfurt. I don't know what it is, but the Hauptwache makes me sad. It makes me rather inwardly pull in my head and think, if I want to drive out someone the clichés about the ugly Frankfurt, then I have bad cards at this place.

Ordentlich was her makes of course the Opernplatz, especially now at Christmas the lighting was simply breathtaking. I also like the Schweizer Platz: appealing, star-shaped design combines here with liveliness. But liveliness can also backfire: Squares like the Roßmarkt (after all in a prestigious city centre location) or at the Paulskirche are rather connecting routes from A to B. Tourist magnet and parking lot for coaches seem to me at the Römerberg more like "Hempels under the sofa" than that they invite you to linger.

In contrast, one's own initiative can make a difference: for example, the Frankfurter Garten upgraded Danziger Platz and proves that "beautiful" doesn't necessarily have to mean handsome, but has an attractive effect with a tree house, a witty container caf&eacute; including a roof terrace and "urban gardening". All the more regrettable that the association is now threatened with insolvency due to tax debts.

The triangle between Konrad-Adenauer-Straße and Mainufer has made it. The Fischerfeldplätzchen attracts its hip diners in both spring-like temperatures and snow showers to the hip restaurants and Caf&eacute;s with Brooklyn flair. Here, velvet armchairs add retro flair and long benches make for convivial chatting.

What are your favorites?