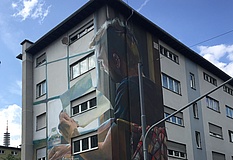 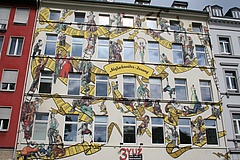 Sometimes it pays to look up when walking through the streets of our city. I learned this in 2013, when numerous building facades became temporary works of art as part of an exhibition at the Schirn about Brazilian street art. In Frankfurt, there are always great murals - sometimes temporary, sometimes permanent - and large-scale graffiti artworks. We even have a house in our city that owes its name to its wall painting. We are of course talking about the "painted house" in Sachsenhausen. Today I'd like to take you on a walk (or even a bike ride) to some particularly worth seeing works, which also make great photo motifs, and also introduce you to a few other special murals. Are you ready? Then let's get going:

Art on the Wall of a House - A Tour

.Anyone driving into or out of Frankfurt via Miquelallee will no doubt have spotted the large-scale mural that stretches across two houses on the corner of Hansaallee. To enjoy it in its entirety with all its details, however, it is not enough to drive by here and risk a quick glance. The two-part mural by the artist CASE Maclaim shows "sender and receiver": On one side a woman sitting at her typewriter at night and on the other side a man reading what she has written during the day. It's a really great piece of work, ideal as a destination for a stroll - especially as Grüneburgpark is close by.

But if one street art project isn't enough, you'd better get on your bike now to rattle off a few more stops. It's down the street, into town towards Bergerstraße. At the crossing Höhenstraße/Heidestraße you will pass another great wall painting. In contrast to the work on Miquelallee, however, this one is much older and has been on the wall of the house for several decades. It is a picture full of contrasts, which offers the viewer a glimpse into the very special inner life of the house.

If you now continue to turn right into Heidestraße and follow it for a few meters, you will come to Schleiermacherstraße. Turn left here and after a few meters you are in front of the youth center Heideplatz, whose facade is decorated with colorful graffiti. A nice contrast to the previous, more classical mural. After a short photo stop just follow the street until you reach Berger Straße. Now go down Berger until you reach Merianplatz. Here, a house facade is literally pulled up by an oversized zipper. With a little ingenuity, you can certainly take some amusing pictures. A little further down, opposite the entrance to Bethmannpark, you'll come to a house wall on which one of the city's most famous graffiti figures is up to mischief: The CityGhost! You have surely seen this creature many times, as it can be found on house walls (e.g. at the DRK at Günthersburgpark - also worth seeing), on trash cans, on electricity boxes and many other places.

If you still feel like it, you can walk (or cycle) through the beautiful Bethmannpark to Friedberger Landstraße and then follow it out of town for a few meters. At the corner of Gaußstraße, artist Thomas Stolz has immortalized a large portrait of scientist Carl Friedrich Gauß, who some of us still know from the old 10 DM bill. Right next to it, a bull & bear painting by Guido Zimmermann adorns another house wall.

You want more great wall art? No problem, I have a few more tips for you:

Eintracht love on the house wall

The Eintracht plays a very special role in the hearts of many Frankfurt. Since it is natural that the traditional club is also the subject of many graffiti and murals in Frankfurt. Especially around the Waldstadion (there are actually people who call the stadium Deutsche Bank Park) you can find a lot of Eintracht graffiti - for example in the railway underpass Flughafenstraße to E5 of the stadium. But Eintracht is also represented several times in the city on large-scale murals. Four special Eintracht house walls I would like to introduce you here.

The first is a mural that is less about the club and more about an impressive sign against racism. In Niederrad, the likeness of Anthony Yeboah, immortalized by artist Mathias Weinfurter, stands for more tolerance in sports as well as in everyday life. "We are ashamed of all those who shout against us" reads the writing on this mural, which was inaugurated in 2014 in the presence of Yeboah himself. The house is clearly visible from the Niederrad S-Bahn stop, so anyone coming into the city from the airport or heading out of the city towards Wiesbaden will pass this mural.

A mural in the Westend celebrates the 2018 Cup victory. A giant DFB trophy is emblazoned on the front of a house in Grüneburgweg (seen on the back in Unterlindau), commemorating one of Eintracht's finest moments in recent years. Another milestone in the club's history is celebrated in Bockenheim. In Werrastrasse, the artists' collective "Frankfurter Farbe" spent 300 hours of work on a mural depicting the club's UEFA Cup victory in 1980. On the mural, Charly Körbel holds the UEFA Cup aloft - an unforgettable moment for many, immortalized here in an impressive way.

And finally, the collective "Frankfurter Farbe" has also dedicated a house wall in Heidestraße in Bornheim (parallel to Berger Straße) to Eintracht - more precisely, to their living room, the Waldstadion. These house walls should have seen every Eintracht fan.

All of Frankfurt on a wall

Naturally, Frankfurt itself is often the subject of wall paintings of any kind. In the city centre you can discover such a painting directly at the Hauptwache. If you walk from the Eschersheimer Tor on the right side of the street in the direction of the Zeil, direct your gaze just before reaching the Hauptwache slightly to the right on the wall there. The small city view you will find here is only an appetizer, because you will find a really impressive work a few hundred meters away at the back of the Kleinmarkthalle. Here, on a wall of several meters, everything is summarized what makes Frankfurt: Grie Soß and Apfelwein can be found here as well as Goethe, Heinz Schenk and Fraa Rauscher. A great work with many small details, which you can admire best on Sundays, when the Kleinmarkthalle is closed and the parking lot is largely empty, in its entirety.

Similarly worth seeing, but on foot or by bike rather difficult to reach, is the large-scale painting of wall and walls at the bus station at Terminal 1 of Frankfurt Airport. Here, Frankfurt's favourite places such as the Palmengarten, the zoo or the Senckenberg Museum, but also the main railway station or the Eintracht are pictorially honoured. Especially the somewhat larger city portrait is absolutely worth seeing and a great photo motif.

To conclude this blog post, I have a few more tips for you that I personally really like: There is for example the wall painting of the tailor's guild in the Bleichstraße, about opposite the Peterskirche. There are also many colourful house walls in the Ostend - for example directly at the Ostbahnhof, where you are greeted by the colourfully painted façade of the Frankfurt Pub on Hanauer Landstraße. And further up Hanauer, opposite the Riederhöfe tram stop, you can discover another mural by Guido Zimmermann. Of course, this is only a small selection of impressive, amusing, original or simply beautiful (house) walls in Frankfurt. You surely know some great murals or large-scale graffiti that are a must-see? Feel free to send us your tips: marketing@trifels.de 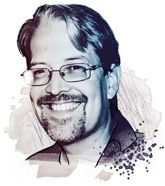 send by e-mail
print
Walking around the city - Discovering funny art in the Grü ..
Discover Frankfurt in a different way - Geocaching in the ..