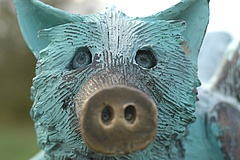 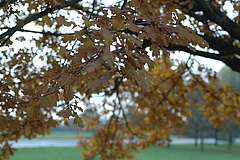 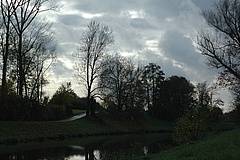 That's when you're drawn to the sofa after work, with a glass of wine or a hot ginger tea and you're fine. In fact, today I want to beat the drum properly for the eleventh month of the year, it has so many adventurous and also droll things to offer outside. Starting with the colours of nature: gold, mustard and green have been in full bloom for a few weeks now, bringing a golden touch to the Rhine-Main area, to forests and parks. Chestnuts and beeches alike are changing from green to yellow and rich mustard at the ramparts or green oases like Huthpark. Vivid red here and there adds the horse chestnut as a bright splash of color.

Start your autumn adventure best at the Old Airfield in Bonames, which welcomes you with willows, poplars and birches. The special thing about nature in the north of Frankfurt? Wet areas along the Nidda and trees growing wild. My tip for those who want to experience something with kids - check out the Fire Brigade Museum!

You can read more about the Old Airfield in my detailed post about it.

Exotic nature in the city centre, extensive areas along the Nidda and huge beech trees in Huthpark

If you're not roaming around outside now, you're missing out on the autumn show that nature is putting on right now.

For example, Huthpark (near Seckbach in the east of Frankfurt) is famous for its huge old copper beech trees, the "Nice" on Untermainkai for its rare exotic and Mediterranean tree species, and Volkspark Niddatal for its extensive groves of native trees that provide wildlife with a variety of hiding places and food.

Each green space has its own character and they always offer recreation, fresh air and a variety of exercise opportunities.

Where is Frankfurt's thickest tree?

In Frankfurt's parks and green spaces, almost 122.000 trees, all recorded in the tree cadastre of the Grünflächenamt.

Frankfurt's "thickest" park tree, a plane tree dating from 1820 and a trunk diameter of 201 cm, can be admired in the Bocken&shy;heimer complex at the Nebbienschen Gartenhaus.

The diversity in Frankfurt's green spaces is amazing: 417 different genera, species and varieties of trees can be discovered.

At 68 hectares, the Frankfurt Main Cemetery is more than twice as large as the Grüneburgpark in the Nordend.

Over 6,100 trees make it a very special place to pause - a refuge in the midst of everyday stress. Like the district cemeteries, it features valuable trees, such as the hanging beech at the old portal.

Comical on the trail: monster children and pee trees

The green belt at the old airfield in Bonames, for example, not only offers a natural paradise, but also amuses visitors with the droll green belt animal that looks jauntily towards you.

Frankfurt cartoonist F. K. Waechter (1937-2005) produced a series of sketches of Komi&shy;art on trees, which he donated to the city of Frankfurt.

Suitable trees have already been found for seven of his ideas, and they all stand along the GrünGürtel&shy;Rundwanderweg.

.There are "monster children" lying under an old oak tree, an owl in a Norwegian sweater perched on a tree, or a squirrel&shy; king striding from one tree to the next - over a row of his subjects.

And at Jacobi&shy;pond, there's even a tree that pees back after being "peed on for 300 years."

Fun Fact: At six acres, the pond is the largest still body of water in our city. The artworks continue in modern form what was already popular with princes and the people as little follies in baroque gardens.

Frankfurt's komi&shy;trees are quiet and unauf&shy;rged, but perhaps all the more effective for it. For a walk along the Nidda or in the ramparts, however, dress warmly in the cold and wet weather.

Have you already discovered these strange trees? And how are you experiencing November?