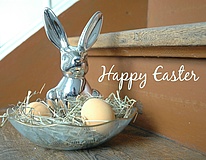 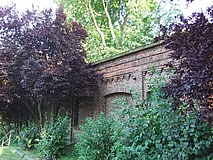 "He who seeks, finds" is the motto for Easter, especially for the little ones. But adults do not have to go empty-handed either, for there are numerous hidden places in Frankfurt that are worth discovering: whether it's secret gardens in the Wallanlagen or Frankfurt's smallest off-Broadway theatre. The search is worthwhile:

In the Wallanlagen, which formed the former moat around medieval Frankfurt, is hidden in the section "Eschenheimer Anlage" an underground garden: laid out nested over four levels and completely unbothered by the large cinema opposite or the adjacent main traffic.

The Wallanlagen offer so much that a separate post is absolutely necessary for it. Therefore, for fans of deep digging, it should only be briefly mentioned that in 2009, eight and a half meters below ground, remains of the former defensive wall were discovered at the height of Bleichstraße.

Not far from this, namely in Stiftstraße can be found the Peterskirchof from the 16th century, which has something enchanted about it because of its weathered existence. Not only worth seeing because of the adjacent St.Peter church, which meanwhile knows how to inspire with its cultural events. But above all as the resting place of Goethe's parents: Catharina Elisabetha Textor and the lawyer Johann Caspar.

There is also something to discover in the east of the city, and that is the largest forest playground: the Heinrich Kraft Park can be found in the more than thousand-year-old district of Fechenheim.

Not tired of discoveries, we are drawn further to Sachsenhausen to the Theater "Alte Brücke". In the Kleine Brückenstraße, the "smallest Off-Broadway Theater" in Frankfurt, according to its own description, already draws attention to itself with illuminated signs.

From Hibbdebach (Sachensenhausen), the best way back to Dribbdebach (city center) is through the Taunusanlage: where we namely encounter the statue of another great German poet: Friedrich Schiller. (For those who missed it, yes, April 1 was the 200th anniversary of the birth of Prince Bismarck, who can still be found as a monument in the Höchst district.)

Where we are now in the west, in Höchst, it is worth taking a detour to the Hoechst Industrial Park to visit the Peter-Behrens Bau: The expressionist structure and its impressive brick designs date from between 1920 and 1924.

To stay with the building: One of the really without exaggeration most sensational finds could announce some time ago the Leonhardskirche. Because a Romanesque church is hidden under the late Gothic place of worship, seventy graves of privileged citizens were uncovered last, it is probably legitimate to say that in the Catholic church currently no stone is left on the other.

There's a contrast in the Nordend: neatly restored in the Holzhausenpark lies a baroque moated castle from the Middle Ages. Built by the patrician Holzhausen family, it now serves for concerts and other cultural events.

Last but not least, since the Easter egg basket is well filled, I'll reveal my personal favorite: At Paulsplatz between Braubachstraße and Berliner Straße, the first diamond exchange of the Dutch in the 17th century stretched along the entire row of houses. Unfortunately, nothing is left of the splendor of the building today, by the way, the first stock exchange was built next door at Liebfrauenberg. Happy Easter!

send by e-mail
print
Where Frankfurt is Funniest
Hessendöner in the charming Brückenviertel - from beverage ..