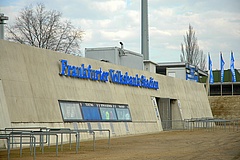 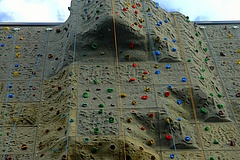 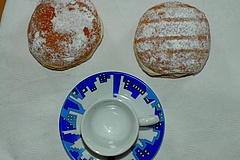 Strictly speaking, there are no longer 28 things for February on today's date, but only 27 things; but I don't want to be so stingy for once, and I'm putting one thing on top just like that for everyone! A "gift thing" for a successful start into the second month of the year, in which so many exciting things await us.

Spring is already a bit in the air

So the mud on the paths is foreseeably soon gone

Ambiente, the lifestyle fair invites you from 10 to 14 February. Trends for Dining, Living and Giving want to be discovered!

After all, we can now cheer on the FSV at Bornheimer Hang in shallow rain instead of freezing cold

And celebrate parties on Rosenmontag

Which means: borrow costumes for the carnival now at the latest, dust them off, or whatever. I'm going as a shower, as usual. :-)

I'm curious to see if the Main gives us again, high water at the Schöne Aussicht.

Where we are with rivers: In Eltville, the redesigned riverbank promenade is getting a little fountain (mark it as a destination for spring!)

Hurrah: Hesse pays down debt for the first time since 1969 (I was three then;-)) Debt back

A touch of Chanel blows through the Palmengarten with the camellia show; the flower that fashion designer Coco Chanel once chose as her trademark and which inspired Alexandre Dumas to write the tragically beautiful play "The Camilia Lady".

Big Stage: As always, the Film Museum celebrates the Hollywood "Oscars" with a "Long Oscar Night" starting at 11 p.m. Feb. 26!

How to get home then? Soon the suburban and underground trains will be running at night!

And cyclists will get more space. At least on a brand new bike lane on Giessener Strasse, between Marbachweg and Homburger Landstrasse.

Tennis fans know: Germany is taking on Belgium in the Davis Cup this weekend at the Ballsporthalle.

Others, however, might be drawn to Königstein: the romantic Villa Andreae there has a new owner, whose tower is supposed to be reminiscent of the Eschenheimer Turm.

9000 square meters of skating surface in the ice sports hall want to be curved.

Why not try warm bathing in Bergen-Enkheim?

Climbing for the family at the climbing hall, Vilbeler Straße 7, (T-Hall)

Finally time for a latte at "Croquant", the new French Caf&eacute; in the Europaviertel

Zoo: new tiger Vanni is waiting for a visit

Finally, excursions again: for example to the Nidda dam in Schotten

Ab to the leather museum in Offenbach, which celebrates its 100th anniversary in March. Since its foundation it has collected eagerly and has 30,000 exhibits to show

To do nothing at all.

For once always on the first Sunday of the month (5.2.2017), the concentration camp memorial in Walldorf opens its doors from 1.30 pm to 5 pm. Directions: Nordendstraße and Familie-Jürgen-Ponto-Platz

Because the name alone makes suns rise: the L.A. Gallery shows works by Ken Lum - incredible what artists can do with historical American obituaries

Skyliners at home game at Fraport Arena on Feb. 8 at 8 p.m.