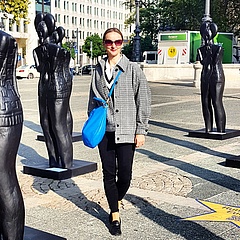 Barbaric, daredevil, apparently not very squeamish in his manner was the man who has been standing in front of the Alte Oper for a few days now, in twenty-five copies and designed by Ottmar Hörl. The conceptual artist is known for his serial figures and already developed the traffic light manikin for the celebration of German unity in Frankfurt. Now there's one man. But not just anyone, but a Celtic prince with 2500 years on his back.

The Celtic prince should in future be a brand ambassador for the culture of the state of Hesse. “What the Bavarians want their King Ludwig to be to Bavaria, the Hesse should become to the Celtic prince“, Hörl wished at the unveiling of the figures in front of the Old Opera in the presence of the Hessian Minister for Art and Culture, Boris Rhein. Before the opera, the Celtic prince remains until 14 October, then travels to return to the Römerberg from 30 October to 5 November.

Naturally I asked myself, nanu, why a Celtic? We know about our Romans who shaped the area (The Roman is the town hall, the mountain before it is the Römerberg, In the new old town there is a house with the inscription „Zu den drei Römern“ to mention only a few obvious examples.) Well, these gentlemen met the Celtic group here in Hesse. And that in the surrounding area of Gießen, which is one of the most important archaeological sites in Germany! Their prince can become a brand ambassador for the state of Hesse!

As such, the papier-mâché figures advertise the umbrella brand “Culture in Hesse“. The campaign aims to draw attention to the many cultural sites in the country such as castles, palaces and gardens.

Apropos Celtic Prince: Who are these Celts?

Also, 1.no ancestors of Irish, Scottish and Welsh cultures. 2. the Romans also called them “Gauls“ and 3. for a long time they were regarded as wild barbarians and daredevils. But with this an exhibition in the Museum Keltenwelt am Glauberg „Mythos Kelten. Looking for clues in Europe“ cleaning up. There is also the original 2500 year old sandstone figure of the Celtic prince on display.

Why is the Glauberg now so special?

I didn't even know the Glauberg until Sunday, but it has now shot up my excursion list. What's the matter with you? Because the Glauberg was an early Celtic princely seat! Among other things, princely tombs and larger-than-life warrior statues have been preserved.

The Celts are therefore an experience. In October not only here in the city, but permanently in the “Museum Keltenwelt“ at Glauberg. There, the archaeological park invites you to walk and hike - a fabulous destination as just assured me by a good friend who was there with her five-year-old twin boys. Oh, who's planning a trip: Don't forget the dragon! ;-)

How do you find the figure? Have you been to Glauberg?

send by e-mail
print
Suit, anchor and bracelets: New fashion stores in October
Out of everyday life - guest in your own city