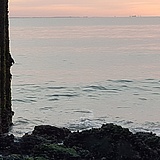 To the left of Germany is no coast, instead two smaller countries are bravely keeping their heads above water. We know they're there. Because they keep the water off us, so to speak. If you don't live right next door like the people from NRW, you might just know that football is not bad (was), the fries and cheese are delicious and that the language sounds very funny. Oh yes, and every year the neighbours rumble through our country to the south with their funny followers. But as is customary among good neighbours, no one harasses the other in excess. Every once in a while, checking over to see if it doesn't smell funny next door, that's enough. But far too seldom you get together for a cup of coffee. Or even celebrates a neighbourhood party.

If we like, then the Book Fair thought so, it doesn't go on with the dear neighbours. Because when the Book Fair opens next week, Flanders guest country. What really fascinates, because not the Netherlands or Belgium are invited, but “the Dutch language“. Two comparatively small countries, with an enormously rich spectrum of culture, tradition and history. Who is not looking forward to the words and books?

Who is interested in a very legible all-round cover through Dutch history is recommended to Gert Mak. Two excellently translated novels by Remco Campert fascinate me with their poetic language without drifting into the terribly flowery horizon.

When I take a holiday at the belgian and dutch North Sea, I like to be inspired by the old seafaring tradition or the numerous old paintings in the museums, the merchant tradition and the architectural skills. This is the motto of the Book Fair „Dit is wat wir delen“ - this is what we share: not only novels, non-fiction books and poetry are therefore presented, but also new forms of book art, the creative industry and other art movements.

For the first time, the Book Fair is presenting a “Global Illustration Award“ together with the International Information Content Industry Association (ICIA) as part of THE ARTS+, the new trade fair for creative artists and artists.

The anticipation has apparently already captured many in Frankfurt. So the Mousonturm yesterday and this evening  showed the opera "Bosch Beach" as part of the "Tollen Künste" from Flanders & The Netherlands Guest of Honour Frankfurt Book Fair 2016.  A powerful opera inspired by Hieronymus Boschs disturbing visions of hell on earth. Staged by author Dimitri Verhulst, director Kris Verdonck, composer Vasco Mendonça, the Amsterdam Asko|Schönberg Ensemble and the Genter LOD muziektheater.

Who wants to visit Flanders now, have a look here: Citybooks - about beautiful and cool cities in the neighboring countries

send by e-mail
print
Pink Party or: Coffee party with sparkling wine and cupcak ..
Seduction in autumn: explore the apple paradise on the Loh ..