A question of soup 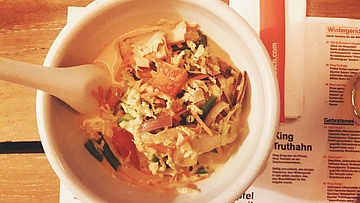 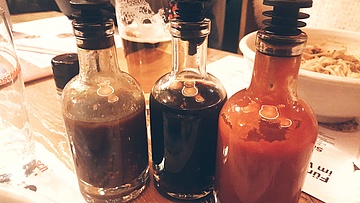 Well, I don't know how you are, but here on the table the very last Christmas cookies are really gone. And that's a good thing. January is there to make the table clean and to look forward to the new year with all its possibilities and empty pages in the calendar. Maybe you already have one or two appointments with colleagues for lunch. Otherwise…blossom-white uncertainty.

Fresh I would like to start anyway. With new vigour and energy. This also includes leaving cookies and dumplings. Instead, I'd rather go for juice and soup. Let's get this straight. I'm not a health apostle. It's the variety in the menu that excites me. Apart from the fact that soup shops can be found here in the city, which are so delicious that I could feast there every day.

Who thinks now: Oh shock, oh horror, what's she coming to me with the soup Kasper, I'd like to shout to him: Kasper's soup is not as thin as it used to be, either! Nowadays it is culinary and taste experiences: I only say “sweet potato coconut“. And that means something, where the K-fruit can stay stolen!

Meiner Meinung belongs the poor soup rather to the underestimated food, besides, it can do so much for us as for instance body and soul warm - which increases the mood 1a as well known. In view of the many uncertainties that will come into our house in 2017, it would probably not be bad to spoon out a soup more often. The philosopher Georg Christoph Lichtenberg already considered this: „The food probably has a very great influence on the condition of people as it is now, the wine expresses its influence more visibly, the food do it more slowly, but perhaps just as surely, who knows whether we don't owe the air pump to a well cooked soup and the war to a bad one often.“ Fortunately, in Frankfurt we cannot save ourselves from good soups at all. My three favorites I have put together today.

*Mosch Mosch. Often crowded in the city center, so it is advisable to reserve just on weekends. Unbelievably many also have Foodora deliver to their homes! Udon must be tried! Goetheplatz 2, 60313 Frankfurt

*Muku in Sachsenhausen has almost cult status, because it is recommended by the Japanese. Now I'm chatting it out here …*sigh* The waitresses communicate with the kitchen via headsets, speciality is natural: ramen. Dreieichstrasse 7, 60594 Frankfurt am Main

*Eberts Suppenstube lures office employees at noon and offers among other things the popular stews such as lenses, peas and Rinderkraftbrühe. Who can resist? 3 branches in Frankfurt. Parent company: Großen Eschenheimer 5, 60313 Frankfurt

send by e-mail
print
How well do you know Frankfurt?
Winter in Frankfurt: A question of nerves and light