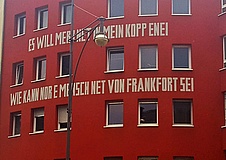 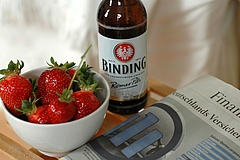 Sure, anyone born here feels at home. "How can anyone not be from Frankfurt?" enthused the dialect poet Friedrich Stoltze. But it is also a truism that more people from other cities and countries move here than in any other German city.

How quickly do they actually become native? I only have to look at my own front door: the neighbours among us? Moved here from Berlin. Next door? From Austria. The rest? From Rhineland-Palatinate, Cologne or East Germany. The little supermarket I trust is owned by a hard-working couple from Pakistan. Are they all local already, I wonder? And how many of you feel the same way?

I was just in the far north for two days, in Hamburg. Without question, a beautiful city with a dreamlike location. A little distance from everyday life changes the view of your own city.

And so I ask myself: What is it to be at home? What does that mean?

&middot; The language? I don't know any dialect. I'll leave that to others. But when I go to my parents in Lower Saxony and no one there speaks dialect, I miss something.

&middot; The skyline. Is that a cliché? No. My heart jumps for joy every time the A5 curves in near Giessen and suddenly reveals a view of Frankfurt. Seen so often, yet always beautiful!

&middot; Favorite spot on the Main? Whether at the Nice, the Main Caf&eacute; or the Oosten, I think those who enjoy their leisure hours with friends take root.

&middot; Where we would be at the most important: "Home is where the heart is" - Home is where the heart opens. I think Frankfurt is also such an open city because its people are open. Those who are new know how others feel. Finding a connection? There are plenty of opportunities for that: from cooking classes at the VHS or the Genussakademie to Facebook groups that have brunch together or arrange to go to the theatre.

Those who want to feel even more at home in Frankfurt can join us in Griesheim this Saturday. Those who now raise their eyebrows in surprise will be astonished. Because the beautiful corners, such as the marina, secluded gardens and brick houses with courtyards and back houses, are hidden in quite unexpected places between the Nidda and the banks of the Main. For example, the gardeners planted the signal boxes at the "Griesheim" S-Bahn station, for which they received the "Creative Gardener Award" from the City of Frankfurt in 2016. The International Union invites to chat and coffee at the garden gate under the title "Day of open gardens and courtyards".

And now that the Historical Museum has just opened chicly with impressive architecture, the new director invites Sunday to the "Takeover" all citizens with free admission. (Fine idea, I think: sounds a bit like - free beer for all :-)) But the real kicker? The Historisches Museum wants to be a "city museum" in the future - so that all Frankfurters feel at home.

How at home do you feel in the city and why?

Discover Griesheim: Saturday from 1 to 6 p.m. (Map and addresses to download and stroll around.)

send by e-mail
print
What a Mad May
Is this the perfect summer? Record attempt and cup final