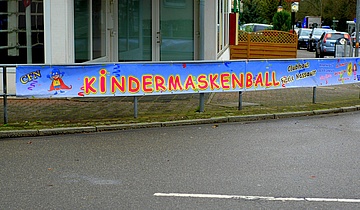 If you say February, you have to endure Carnival too. That's what it looks like this week. We've got to get through this. Some are already fidgeting with impatience because the adventurous pirate costume is waiting in the cellar. The others fidget, because they find joy stupid at the push of a button.

What kind do you belong to? As a native of Lower Saxony, I didn't think I had much to do with carnival anyway. But the many evenings in front of the TV with my grandma at „Mainz Mainz stays like it sings and laughs“ seem to have left deep traces in my brain.

In any case I have been infected with the carnival virus for a few years now.  I even bought a costume last year and went - as a shower.  That was very entertaining and certainly provided a topic of conversation. But because it's hard to top, I withdraw in 2018 to my usual costume - the policewoman. Finally again hand out parking tickets and allow speedy drivers like me to put themselves in their place :-) Höhö….so I paint that out!

If you hate carnival, you simply celebrate an anti carnival party. Motto: Good mood bans, docking with bad songs of the 80s and cheap Lambrusco cups. Of course you can't laugh either. But all two things scribble on a piece of paper, which they would immediately correct in Frankfurt, the anti-fool could steal the key of the city from the Lord Mayor on Carnival Saturday.

What would be written on your piece of paper? With me? I would let a miracle happen and finally let underground and suburban trains run cheaply for all at all times and everywhere. I would paint all the houses in the city in a different colour every year. 2018 is ultraviolet the colour of the year. That's a good start. That would be the end of my anti carnival party note, so that we would have to go over to drinking Lambrusco.

Whoever laughs or has no understanding for colorful houses should not go to Heddernheim to carnival. Why there? Because in the village district called Klaa Paris“ the hut burns on Shrove Tuesday. Not in the city centre, but in Heddernheim lies the centre of the celebration, which would make even Brazilians pale. Parade, a golden laughing stock and meetings to the bitter end on Ash Wednesday with about 100,000 visitors. Isn't that something? You'll even find your own carnival museum in Heddernheim.

You're wondering what a “Golden Beauty of Laughter“ is? I had to smile at the name. The wife of the local police commissioner receives the Order for her “positive charisma“ “ - by the way, the only order awarded by the Zuggemeinschaft Klaa Paris to ladies “ who distinguish themselves by their positive charisma, their warm, golden laughter and constant friendliness and love for the tradition of the Klaa Paris carnival.“

I suppose the bearer of the order will do her best to make it happen. It starts at 2.31 p.m. in the Roman city, which can be recognized by the pink houses!

Costume ideas from the Wild Bull to the Instagram bunny

Fasching feiern is not so stupid, but even quite clever. If I have zero promises in my work, if my students don't listen to me at all in the evening (happens rarely, but is supposed to happen), then I can really wallow in authority  - see above for the choice of costumes. A cap like that from the watchman makes a difference. In this sense, however you spend the next two weeks - may the Force be with you! Who is still looking for a costume idea, for him perhaps the “Wild Bull“ is an idea?

And now hand on heart: carnival - yes or no?

send by e-mail
print
Frankfurt dialect: Scolding made easy
Valentine's Day! But how romantic is Frankfurt?