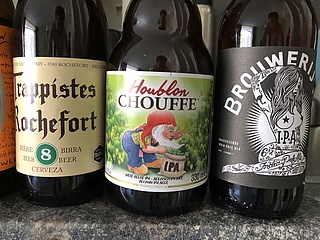 Have you ever heard of a “naked nun“? Not what you're thinking now. No. This is my favorite craft beer. Close behind: Chouffle, Leffe Brune and Trappistenbräu “Rochefort No.8“. All Belgian, all tasty.

But you'll notice: What's the best thing about the colorful, new brewing variety, automatically brings this stupid agony of choice with it.

The bigger the beer menu, the harder the decision at the bar. And that's exactly why Craft Beer Festivals and Tastings are such a fine thing. Here you can try many beers one after the other and discover new things. What fits the upcoming barbecue season super, I think.

There we have the beer

One thing is clear: It is a feast for the senses - what beer has to offer today.

Although beer has played an important role in Germany for a long time, Craft Beer in its current form only came onto the German market a few years ago.

The beer tastings are popular, for example, in the “Naiv“ restaurant at Fischerfeldplätzchen, which also has a tasting room around the corner with an exquisite assortment of shops.

In “Naiv“, beer lovers can taste five to six different types of beer for three evening hours. Sometimes Sauerbier is offered, which is not as terrible as its reputation, and also the in-house blonde, which the Naiv operators have brought onto the market together with a brewery, is usually on the tasting program.

Hop and malt fermented by hand

At the tastings you learn a lot about the different types of hops and malt and how they influence the taste of the beer. Sometimes the Craft Beer tastes more fruity, sometimes more bitter, sometimes it's tasty, sometimes you twist your mouth. One learns to taste the difference between a Pale Ale and an India Pale Ale, can test stouts and is introduced to how to read the labels on the bottles.

The tastings, which attract couples as well as whole company departments, are rounded off by small meals such as tarte flambée.

Often Craft beers have bizarre names, for example “The future looks bright“ from the Berliner Superfreunde or „Hair in the Mailboxes“ from the Danish brewery Mikkeller.Or mischievous brewers create an ode to religious nuns.

Have you tried Craft Beer yet? Which variety can you recommend?

The month of May is all about craft beer: