Dark corners, cool bars - Where Frankfurt is most urban 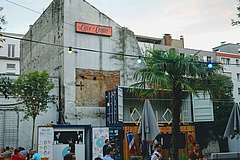 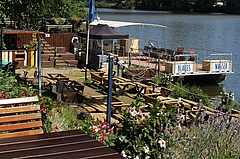 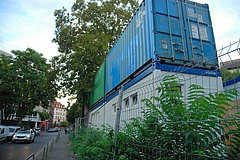 Finally it rained a bit. But that's not why the summer is far from over, but for me, who belongs to the team attic apartment, simply a little more bearable. Finally the long evenings outside are even more beautiful! A few days ago I had a date with two very dear friends: one belongs in the amusing category „As far as bartrends are concerned, I am far ahead“, the other comes from Berlin, which leaves me totally unimpressed ;-)

Then I think casually and relaxed about what Frankfurt can show off so well in the categories “Urban, trendy and ingenious“ - Although I find deep in my heart that Frankfurt doesn't have to be like Berlin at all. If Frankfurt is simply Frankfurt, that's enough, or?

Due with such a skyline and dramatic contrasts as in the station district, where the bank and the red light collide, Frankfurt has its very own, charming character. Yes even the eternal old lyre, “Frankfurt Is so ugly, small, etc. etc., but then I learned to love it“ is almost a successful image again, Frankfurt offers the best of all surprises - namely a positive one.

Surprising and spectacular - in our perception the station quarter is usually still the place to be - sexy, dirty, rich in contrast. What I find exciting, however, is the development of angular cookies just off the beaten track. Still located in a run-down area, Frankfurters are putting something on their feet - even if it's just a pop-up.

A loyal fan community has been pilgrimaging to the Osthafen for some time now. In a former nudist club the “Blaue Wasser“ has taken over there - above appreciated culinary in the restaurant (read more from my colleagues here) and below bar. The restaurant is so popular that a reservation is recommended.

The view of the Main is guaranteed, the opposite bank provides the urban character with its view of a vacant, dilapidated building. The extent to which such areas are currently changing is also shown by the apparently privately organized running meeting, which takes the road up and down its rounds.

Who is driving down the industrially dominated road for the first time: The restaurant is located where most, fancy cars park close to close.

Trendbarmäßig quite far is but this summer temporarily at least the All Saints' Quarter. Never heard of it? It doesn't matter. A lightning survey of my circle of acquaintances, which consists of many newcomers, showed: 100 percent unsuspecting.  I am sure that many have already crossed it or admired the beautiful house at the entrance of the quarter, that offers an idea of old Frankfurt and its former streets with a view of the Domspitze.

Discovered it also only by chance on the way to the Bürgeramt. More edgy is hardly possible right now. Active red light and intoxicating agent live side by side here. Big shops with foreign names like Zeeman (Dutch for -na, what? sailor) sell cheap clothes at the end of the Zeil. On the right around the corner in the Breite Gasse a shop unfortunately does not accept EC cards and gives the impression as if I would not see a receipt for my cash anyway. Unfortunately I don't have any cash at all and have to hang the fumble back on the bar. I promise I'll come back another time. Maybe to the next date with my girlfriends in the yard - this is a bar on a wasteland in the middle of colorful containers in the Breite Gasse. It is a temporary use, because new apartments are to be built there in the future.

Urban, trendy, not smooth and leaked

A small market hall can be found next to the bar, in which twelve Frankfurt restaurants from all parts of the city offer international street food. Vegan ice cream and vegan kebabs no one has to miss. The yard, which developed into a sought-after venue during the World Cup, is also accessed through a container. Palms wag, a colourful mixed audience squats on wooden benches, drinks beer and probably chats about the weather.

send by e-mail
print
How do I survive the dog days?
Yokohama, gardens and Co: what I learned on my Japan trip