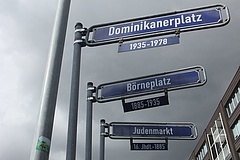 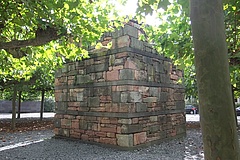 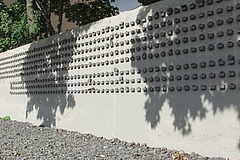 Who simply loves living in Frankfurt? And why is that? My reasons are numerous, two of them can be found directly, but unfortunately very hidden in the city centre: in the former Jewish quarter and the Jüdische Museum at Untermainkai. In general, immersing myself in the rich Jewish heritage of our city is always a true joy for me: In my first years I was constantly on the road to experience this history or to discover those traces. It is also reassuring that despite the three-year closure of the Museum Judengasse, the current cultural offer leaves nothing to be desired. But there are also numerous other traces of Jewish life in the city:

Ach by the way: from 2018 the Rothschild Palais will present the time after 1800 and from spring 2016 the Museum Judengasse will present the time before that. Any wishes in the meantime? Yes! As a frahling lover, I miss a really Jewish café in Frankfurt like the one I recently discovered in Berlin: Beth's Café in Mitte, which runs the local community. I'd love to imitate it. And again, in 1965 Germany and Israel resumed diplomatic relations. In view of this, a translator from Israel recently presented his collection German loanwords in Hebrew - my funniest discovery? The @ sign. If your name is "Strudel" :-)

Whoever is interested in learning Hebrew will find it in the language program of the Volkshochschule.