E-Scooter conquer Frankfurt - What do I need to know? 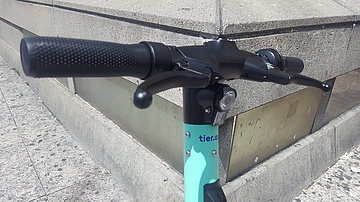 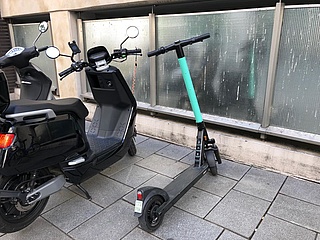 There they roll now. The first electric scooters are on their way in Frankfurt.

Shortly decided to get on an electric scooter and jet through the city - this is now also possible in Frankfurt. In the Ostend, on the Zeil or in the Gallus I have already met some tentatively rolling fellow men. You probably noticed some of them?

I have to admit. The thought has charm. The first rental scooters have already been set up at several locations in the city centre.

Fast, easy and everywhere to find

As the E-Scooter is now officially introduced, I wanted to know what the devices look like, where they can be found and what I might have to pay attention to. When I asked around my friends and family, every third person wanted to try out the innovative traffic vehicles at least once.

But what is rolling towards us now?

The most important things at a glance:

What is disturbing the city about the new means of transport?

Frankfurt is simply too narrow to accommodate another means of transport. The head of the traffic department does not see any transport policy benefit in the pedal scooters.

There are "no development gaps" in public transport in Frankfurt other than in other large cities in Germany. "It doesn't make sense to me who, for traffic reasons, should rent a scooter for more than one euro to overcome the few meters to the next stop," explained Oesterling. Whoever rents it wants to have fun. This had nothing to do with the planned traffic turnaround. The Verkehrsclub Deutschland, which sees no benefit for traffic, also blows a similar horn when pedestrians and cyclists should now switch to electric scooters.

The fact is: In the USA the e-scooters are hip. In Paris already for a long time in the enterprise. There, by the way, with a mixed result, as I experienced during my visit last month.

So the rental scooters are stored at the station of Versailles like in a shelf directly at the entrance of the station. I find that quite practical in view of the many commuters. Less pleasant is the fact that the scooters are also on the move on foot despite being banned. But now the city of Paris is taking action, handing out parking tickets and punishing traffic offences. Because the scooters have overtaken, the accidents increased.

So it remains to be seen how things will develop in Frankfurt. Yesterday, a scooter on the sidewalk almost mowed a friend of mine down. For my part, I am still curious at the moment and would like to try them out. And you? Would you like to test the trendy means of transport? Or do you find the e-scooters annoying?