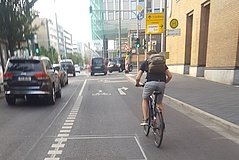 The northern bank of the Main is now closed to traffic. So I got on my bike and pedaled through the city to test how bike-friendly Frankfurt is now. Because the city announced Dolles after Frankfurt 2018 didn't do very well in the test of the ADFC  (Allgemeiner Deutscher Fahrradclub).

How do you move through the city? Are you one of those with a cargo bike? Do you put your helmet on your head in the morning and eagerly pedal into the office? Or do you use the bike like me mainly for things to do, or just to let you drift a bit through the streets?

Short and good: I like cycling for my life, but have mostly avoided it in Frankfurt so far.

What makes me prefer the car? Not personal comfort. No.

I don't like cycling in Frankfurt because I don't enjoy it on the crowded streets. I'm also out in the back with my dog in the basket. That's just too unsafe for me.

However, since its decision to make Frankfurt more bicycle-friendly, the city has been eagerly brushing the streets full of cycle paths. And since the beginning of August, the northern bank of the Main has been closed to traffic for testing purposes.

The decision is not uncontroversial, which is in the nature of things: some people are happy, others are annoyed. The fact is: whoever uses a car in the future must have even stronger nerves than usual. Because one thing is clear: the city of Frankfurt wants to become more bicycle-friendly. Even the demands of the Radentscheids have been taken over by the department, which I reported to you in April last year in the post about "Schöner Radeln".

The future of urban traffic means: Cycling will be encouraged and expanded, cars will have to put back.

2018 The ADFC Frankfurt had only certified sufficient bicycle friendliness: Parking cars on cycle paths makes life difficult for cyclists. A cycle path that suddenly ends at the road increases the feeling of insecurity, as does the notorious Friedberger Landstraße at Scheffelstraße. It's a place that leaves me confused every time. First no cycle path at all, then a few meters of track and suddenly the end is again.

Finally a cycle path for the Friedberger

However, as I said: the city has big plans and in its bicycle traffic planning it is targeting exactly the section from Börneplatz to Friedberger. Whereby more space for cyclists logically means one lane less for cars. Will more safety for bicycles bring more avalanches? The city speaks of a "test phase". So-called artificial traffic jams should not be created.

And that's still the rule in Frankfurt. What unsettles me is not only the unpleasant proximity of the cars, but also the behavior of the car behind me to have to assess. To hope that there will be enough space on the left lane at the Friedberger Tor at the level of the ramparts to overtake me. If not, I hope for sufficient patience of the driver, so that he does not pass narrowly.

On the Taunusstraße the situation is not much better. A cyclist who wants to turn over the junction Am Hauptbahnhof needs strong nerves: The left turn lane leads me exactly to the middle of the busy street, which is probably only quiet on Sundays.

However, at last a ray of hope awaits me at Baseler Platz: a thick wide cycle path with arrows leads clearly and safely over Stuttgarter Straße.

What can I say? This is a completely different driving experience now. On the three-lane road, the wheel and cars are now clearly separated - which makes the big difference.

>The Mainkai barrier is delightful for cyclists

At the end of my tour I am curious: What about the closed banks of the Main? What do you want me to say? It's wonderful - everything is free except for pedestrians, who of course now stroll across the Uferstraße at the Mainkai without looking around. But the most important thing: The cars are far away, even barely audible. It is as peaceful and quiet as on a bicycle tour through nature. For a moment I'll be in cyclist heaven. Reality brings me back to the ground of facts at the level of the Old Bridge: only road, no cycle path towards the Beautiful View. I decide to pedal further into Ostend over the empty and wide footpath. Safe is safe.

By the way: If you don't feel like going to town at all and are still looking for a bike tour for the weekend. How about an ultimate tour over the Main?

How do you experience the changes in transport policy so far? How safe do you feel cycling through the city?