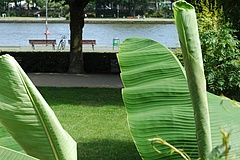 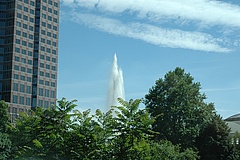 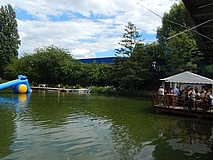 "There would be no great pain for me if I were alone in paradise" - When Goethe wrote his famous sentence on paper, he certainly reminded me of the fresh, frank and completely textile-free swimming trips with friends.

The Frankfurt boy preferred to jump in lakes with male companions. Although in Goethe's time public bathing took place mainly on and in the Main. Yes, our poet liked to splash around in disorderly unclothed, which was already considered a provocation in the 18th century. But in general, most Frankfurters got rid of their Buxe rebelliously carefree.

How do I know that? From the wonderful, worth reading book "Baden unter Palmen" - from water gymnastics to aqua jogging, which the health department published in 2014.

Yes, who reads bravely here regularly, can learn a lot. Especially that, unlike Goethe, I have little for the cool wet. I can keep my head above water. So you can imagine how much I was surprised this morning by my sudden idea of a chilly day at the lake. Splashing. Floating. Snorting. Diving - you have such an idea now, yes?

Do June and July have such an effect on you? For me, the sun just has to shine long enough, the sky just has to be bright blue long enough - and I'm already drawn to swimming. To the lake. Or rather the open-air swimming pools? So nice to cool down and refresh.

Bathing in the lake or swimming in the outdoor pool - it seems to me that the spirits are separating. While some are enthusiastic about diving into the lakes, others swear by Köpper into the tiled pool. I like both. Whereby that ends with me rather in "legs dangle in the water". ;-)

But right at the top is the Brentanobad for me with the outdoor swimming pools, which is however strictly speaking already almost a beautiful lake. Even if the bathroom had to be renovated some time ago and I mourn the darker tiles and the even more sloping edge of the pool. It's a little more "normal" now than before. This beautiful, huge bath was created from a river bath in Rödelheim, which unfortunately - like so many others - is perdu. *sigh*

Because this is an incredibly exciting phenomenon in Frankfurt: The development of open-air swimming pools from former beach resorts such as Eschersheim, of which the wide slide and a bridge still bear witness.

But since we have a dog, I have had to do without the Brentanobad. Dogs are not allowed in Frankfurt outdoor swimming pools. However, a pair of baths please the dog owners at the end of the bathing season and open their doors for the four-legged friends - such as the silo bath. There it is called ears and eyes open for the announcement.

Not better it looks for dog owners unfortunately at all lakes in the closer environment. Only in the small City Flörsheim am Main there is a modest dog beach, which I want to try out.

So after you know that the Brentanobad in Rödelheim is my favourite outdoor pool and the Schwedlersee, my favourite place to relax, I would like to know what you prefer: lake or outdoor pool? And what are your favorites this summer?

send by e-mail
print
The June Feeling in the City - Festivals and Summer Solsti ..
My favorite place to buy now: My summer shopping guide