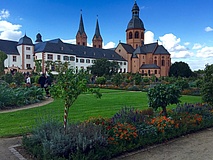 What is the great thing about Frankfurt? Each of you probably has a different answer to that. I like Frankfurt so much. But above all, his situation. The Rhine-Main area, to be more precise. Who lives here, experiences the luxury of an almost infinite leisure offer. There's so much to discover. Constantly and always. That's why I take you on a journey of discovery so shortly before Easter - hiking, cycling, finding something new. There are no limits to your imagination.

March presented itself like an April, don't you think? Rain was followed by sunshine, spring-like temperatures lured us outside. But of course I don't want to pedal the same routes by bike every time. How boring. That's why I looked around a bit to see what there are more varied destinations in the area. I have discovered countless different, sexy

· monasteries and parks throughout the Rhine-Main area that invite you to relax and explore.

Now put your hand on your heart: Frankfurt is a true paradise for us recreational cyclists - this paradise also has its own name:  Regionalpark Rhein-Main, which now extends over 550 kilometres.

To be precise, from Groß-Krotzenburg in the Main-Kinzig district and the Wetterau region, the regional park extends from east to west from Büdingen to Rüdesheim in the Rheingau region. And the heart of the 190-kilometer round route is of course Frankfurt.

Spectacular things can also be discovered along the way. For example a fabulous bridge over the oil harbour in Raunheim, a blue crane in Offenbach or the Opelsteg near Rüsselsheim.

And a special experience is waiting for enthusiastic cyclists this summer in the east - with the extension of the so-called Limes Route, which is 40 kilometers long.

What I found particularly exciting, also for my friends with children: The steles, poplars and trees that reproduce the course of the old Roman border wall.

Rhine-Main explore:  walks or strolling through monasteries. There are no limits to your imagination.

What is the perfect Sunday trip? Walking, getting to know something new in the area, perhaps enjoying a coffee outside without having to spend hours on the motorway. For it halt in the Rhine Main area also in each direction of the compass direction goals offer themselves.

A monastery route does not only make fun, but promises also with the various monastery gardens a varied afternoon. Whether it is the popular Eltville am Rhein with its vineyards or the former Benedictine compartment in Seligenstadt.

The extraordinary thing about all the parks mentioned? They should be presented as historically true to the original as possible. While the garden in Seligenstadt belonged to the convent and was laid out in baroque form, spacious landscape parks such as the one in Bensheim-Auerbach, which are worth exploring due to their ingenious paths.

My Top 5 Gardens and Parks

· The blue crane in Offenbach

· visual axis at the Hohe Straße in Frankfurt-Bergen

· Nidda route: Always along the river through the granary of Hesse

Which targets in the Rhine-Main area appeal to you the most?