Old ways, newly discovered - The Via Regia makes you want to move 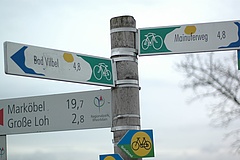 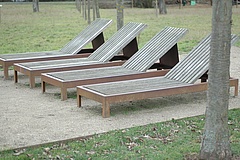 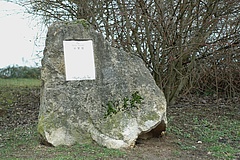 If you look at the thermometer these days, you know that spring is just around the corner. Sun full awaits us the days. Spring makes you want something new, fresh, undiscovered - if that's the case with you, then I have a very nice thing for you. Anyone who wants to exercise will get their money's worth!

Already heard something about the Via Regia? Visitors to the Lohrberg are probably most familiar with the old trade route that used to connect Frankfurt with Leipzig. Sounds good? I've been on a pilgrimage all these days and have discovered exciting things for cyclists, hikers, dog owners and families - a route for everyone, so to speak.

Worship is called for!

The Via Regia goes once across Europe, more precisely it leads from Kiev via Frankfurt to Mainz and finally ends in Santiago di Compostella.

But we don't have to travel that far here in the Rhine-Main area: in Bergen-Enkheim the entrance to “Hohe Straße“ awaits me with an iron plaque, unfortunately smeared, and four loungers for staying with a distant view at the line of sight, the Große Loh.

This is Frankfurt: Traffic all around, not far away the office towers, and in just a few moments I am in the middle of nature, surrounded by bee hives, horses and farms.

Six curious facts about the Via Regia

1. Where does the name Via Regia? Regia come from? is Latin and means royal. The name indicates that she was under the protection of Emperor Barbarossa by decree and assured travellers safe passage.

2. How long is the way? It depends on which connection is meant. In the Middle Ages, the most important route was between the trade fair cities of Frankfurt and Leipzig. The total length from Kiev to Santiago di Compostella is around 4500 kilometres.

3. How long is the German section? The German part meanders from the Rhine via Frankfurt and Fulda to Leipzig to Görlitz over a total of 600 kilometres.

4. Where in Frankfurt can you find clues to the former Königsweg? In addition to Lohrberg and Bergen-Enkheim (navigation: Hohe Straße), various points led through the city, such as past the Gallus Gate in the direction of the Main bank to the Nidda estuary in Nied. Another branch, coming from Mainz via today's Oeserstraße to Marbachweg and on to Bergen, meandered its way.

5. Was the Via Regia a pure trade route? Keineswegs. The old royal road used to be that what Whats App is for us today: the road was used for pilgrimages, messages were exchanged. To this day, the route also connects cultural highlights in Germany and Europe in general.

6. Where is the narrowest section of the road? In Gelnhausen in Pfarrgasse/Haitzergasse the path is only three metres wide. Who goes there: Look for a small house and try to decipher its inscription about “Franckfurtt“ and “the narrowest place“ in the place.

More spring mood might also make you my five favorite places on the Main.

Have you ever walked the Via Regia? Which section would you recommend?

send by e-mail
print
Winter, what now?
Pub Quiz - Frankfurt is looking for the Ratefuchs