Six water houses to fall in love with 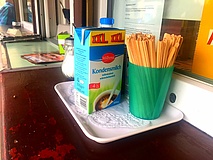 Outside it is drizzling so nicely. There the thought to the water is close and to the fact that Frankfurt celebrates on Saturday coming week the 1. water house day . The outsider asks himself what water houses are and raises his eyebrows when he answers: "Some kind of kiosk." Oh?

But no Frankfurt water house is just a disreputable kiosk with acid drops and cheap coffee. Because let's face it, what would this town be without her? Just -hm- just not Frankfurt. The little stalls are the soul of the city, I dare say.

However, what are water houses at all that are called drinking halls in some places? Despite their name, they are hardly reminiscent of a hall, but rather of architectural feasts for the eyes thanks to their curved forms, as in Gallus or Saalburgallee. Often they stand “free“ or „semi-free“ in the street, as befits a cottage.

A red-and-white painted drinking hall near the Osthafen (East Harbour) sometimes came out big, because detectives Matula and Dr. Renz ate their sausages there in the crime series "Ein Fall für zwei" (A Case for Two).

The frenzy of the people of Frankfurt for their water houses is deeply rooted - until the 19th century, when tap water still made people ill, which is why the workers munched "high percentage" at the little booth. The city supported the water houses - also for an educational reason: the inhabitants should drink water and not beer and schnapps. It didn't help much J The water houses survived though.

A WATERHOUSE FOR EVERY TASTE

Whoever thinks that the love around the little shack is only a fleeting summer affair is wrong: When former mayor Walter Wallmann wanted to abolish the little houses, the city dwellers put a lot of effort into it and prevented something worse. Although only a fraction of the stalls remain, they are now being transformed into cult sites with verve. One of the most popular is probably the Trinkhalle „Gudes“ at Mathias-Beltz-Platz in Nordend. Not a summer evening on which casual people relax with lifestyle drinks. In Bornheim, the down-to-earth village, two pretty, graffiti-sprayed roundabouts lie next to each other. Very sweet: the water house at the terminus of tram line 14. That's how I imagine After-Work in those days: after work off the train and with two steps ordered a beer. The audience mixes and, typically Frankfurt, the milieus squat side by side... Like red lights and bank towers in downtown. Just last week, the water house on Arolser Straße was the venue for a groovy barbecue with beard and undershirt wear and live music.

Where longing people play the lottery every week, kids buy trick-or-treaters and the suit wearer beats his cigarettes, the heart of the banking city. And so with the greeting of the head of the culture department Ina Hartwig to the 1st water house day the drinking halls have finally reached their deserved status in Frankfurt.

send by e-mail
print
No parking lot in Frankfurt
Frankfurt - a fishing village?