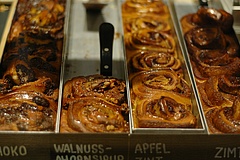 That Frankfurt is the smallest metropolis - how often have we heard that before? “Metropolis with a small-town feeling“ they say again and again. Sometimes I could think, who uses the sentence, donates equal times five euro to the famous Phrasenschwein.

However, it is true that Frankfurt is a small metropolis. But - yes, what is meant by that?

The surface itself? When I moved from the Main-Taunus district to Frankfurt about 15 years ago, the shorter distances within the city were a big advantage. Sure, it's kind of mega to live in a huge city like Tokyo or L.A..  But if I leave the house and know that in case of doubt I can walk to my workplace in Ostend, then that is also a bit of quality of life. When I am strolling down Berger Straße to the city centre for a cup of coffee with my visit, then the way there is already like a small personal city tour for the foreign guest, who is immediately in the middle of the Frankfurt flair and experiences the longest shopping mile of the city up close.

What makes Frankfurt a metropolis?

Is it perhaps the mixture of more than 130 nations that meets real Frankfurt primitive rocks here? To the locals, who every day and every year integrate “countless newcomers“ like me? ;-) Or maybe one of you?

Klar, the size shows up here quite clearly. Of course, the character of a metropolis shows itself with the skyline, which is unique in Europe. But as soon as I leave only a few subway stations from the city centre, I am in the middle of “small“. For example, when I zoom a few stations to the north, for instance to Heddernheim, known as „Klaa Paris“, where the fools cultivate the local carnival traditions.

In Frankfurt the splendour of big money meets the openness and stability of a village directly.

Here I can still have braids braided in an African hairdressing salon and spend a small fortune on delicacies not far from here.

Frankfurt's big hour strikes at night when the towers light up the night sky. And while New York has to green itself the Highline, a former above-ground railway line, to create nature and idyll, Frankfurt is embedded in green. If you're looking for an idyll, you don't have to search long for the “small“ Frankfurt:

A detour to the city forest or to Schwanheim in the west lets me forget the hustle and bustle of the city, especially on a Sunday.

And finally the motto is: „Small, but oho“ - how it is just small places to own and which also contribute to making a „staying in Frankfurt is easier than walking.“

· Frankfurter Pause, fans of cinnamon snails watch out. You've never seen anything like it! There is a high addiction factor threatening: I am still undecided whether I prefer the combination walnut/maple syrup or apple/cinnamon - what do you think? The small coffee house wants to scare away the small hunger in between.
Roßmarkt 10, 60313 Frankfurt

· The Seven Swans Mainkai 4, 60311 Frankfurt - the star restaurant receives inconspicuously behind a brown wooden door completely hidden in the narrowest building of the city. Seven Swans is one of only two restaurants in Germany that have a star for a purely vegetarian menu! Small, but oho, halt!

·  Mampf Wrapped jazz fans know where the music plays. In the tiny Mampf with its drawings and posters lives the love of music. The motto „In the mood for Jazz“, was created during the creation of a live podium for the Frankfurt jazz scene at the end of the 80s.  Sandweg 64, 60316 Frankfurt

send by e-mail
print
Fashion, art and pop-up stores
How do I get into the Christmas mood?