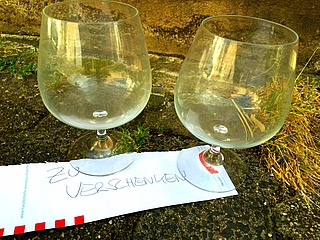 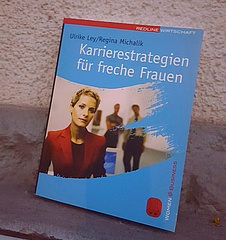 Are you as practical as me? This is really a craze of mine, which shows itself above all when giving presents or shopping. I don't give away useless standing around stuff. If you want to make me happy, you can give me useful things like soap, candles or beautiful pencils... But the penchant for the practical is actually also a penchant for recycling. I'm not a squirrel who can't throw anything away. But I hate to throw away something that's no more dead than dead. Three Benjamines have been besieging my living room for years because they are blooming and blooming and blooming. I don't throw a tipptopically working houseplant on the compost.

The same goes for clothes and books. I like to browse in Secondhandläden instead of buying everything new, I'm a big fan of recycling, I celebrate clothes exchange parties and hand over books worth reading in Bookcase the universe. What I like most about the bookcase is the idea that the book now also enriches another soul. Excitingly, my taste is totally mainstream…*laughing* Whether video or paperback, my things always disappeared from the closet in no time at all.

Secondhand, book exchange, changing clothes, the future demands new creative ideas from us. And for some time now something seems to be coming along: Shopping on Frankfurt's streets. Right next to the neighbor's front door. Can't one now directly call it a variant of the American “Yard Sales“, where people sell directly in front of their own house what they want to get rid of.

No, in Frankfurt people put more and more, a few shoes, old pots or glasses on the sidewalk. Also available with a friendly sign that motivates passers-by to take a look. Which has been really against my grain so far. Just putting the stuff from the attic on the street - I didn't think that was so good so far. Why do people have to fill the sidewalks with old children's crayons or worn out low shoes, I asked myself. This place is gonna look like a dump. Yes, and just as my mood was about to change forever, the tide turned because a great plate came into my life.

I recently discovered the treasure par excellence while walking my dog Kelly - a porcelain plate from Seltmann Weiden. Connoisseurs know - this is for instance the Mercedes among the manufacturers. My mood in the face of this find was similar to that of the first gold diggers in the Wild West. Since then I've always been on the road with my dog's nose ahead - who knows, maybe I'll soon have a whole arsenal of fine cups and plates in my cupboard!

Have you already discovered anything on the street? Or do you sometimes expose something?

This extremely popular flea market takes place once a month on Sundays from 10 a.m. to 4 p.m. in the multi-storey car park of the former Neckermann headquarters in Ernst-Heinkel-Straße.

send by e-mail
print
25 hours in Frankfurt for tourists and locals
Street Art instead of Römer - 5 Selfie Locations for the G ..