The big clean-up - Frankfurt and #cleanffm 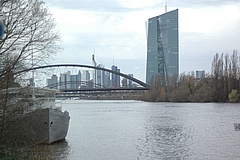 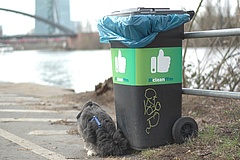 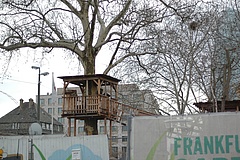 All around the Ostbahnhof in Frankfurt, Germany, the garbage just flies around. Bags here, Krams there. Do we have to? Let's get this straight. I'm not a cleaning freak. On the contrary. But is a full-waste city worth living in?

Round 7500 garbage cans exist in the city. That's an impressive number, you'd think.

The thought of avoiding garbage may be honorable. But if I don't find that purposeful in my case. One of the biggest problems in Frankfurt are pizza cartons and paper cups for coffee-to-go.

Laut FES has significantly increased the volume of wastepaper basket contents over the past five years, an estimated one and a half times. As part of its #cleanffm campaign, the city has just installed more than 500 new waste bins.

FUN Fact: it takes about 15 minutes for a waste bin to be installed. Tschaka!

One or the other of you may have already discovered these nice green buckets with a saying on them?

What does the cleanliness campaign of the city empires want? #Cleanffm is a campaign that includes more public waste bins, so-called cleanliness ambassadors who address people in busy parks, information booths, information given and received through social media channels.

Wake up the cleaning devil in you!

The big cleanup is coming up this month: The “World Clean up Day“ is dedicated to us all and takes place not only worldwide and in the whole of Germany. No, in Frankfurt we are called upon to clean up in order to create an environment that we want.

What's happening in Frankfurt on “World Clean up Day”?

Now it's time to clean up! Anyone who wants to clean up can gather at the Frankfurter Garten in Ostend to clean up the area from the stuff lying around. Highlight: This joint campaign will give you the opportunity to get to know the exciting project for climate and bee protection in the middle of the city!

One week later, you will be motivated to continue: because at “Earth Hour“ on 30 March at 19.30 a.m., the WWF Youth presents plastic waste as an art installation on the theme “Biodiversity of the seas and their threat“.

Whoever thinks now: “Pooh, plastic, what it bothers me“, may I kindly draw your attention to Clean Fact #47: Meanwhile there is more plastic in the sea than plankton.

Who of you has a lot of desire for nature and a trip around the world: The rainforest is very close - because the Tropicarium has reopened its doors in the palm garden!