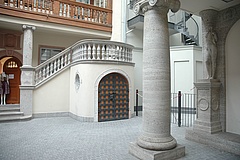 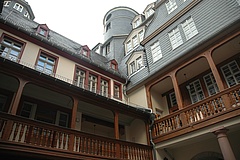 So, now she's almost done. The new old town. And you can say what you want. But like Bolle, I'm looking forward to the opening. I'm looking forward to the view in Braubachstraße. No, the BEAUTIFUL view of a wide archway instead of the ugly Technical Town Hall that used to stand there. You see, I was in favour of reconstruction from the beginning. No, I can't think of anything critical about that. And don't think I'm uncritical. There are enough people who would say the opposite about me. There is enough of Frankfurt that I don't like at the moment.

But I consider the Altstadt project to have been absolutely successful after a visit. Not only as a visual lesson for former buildings of the city. But because it opens wide gorges and bright paths between the cathedral and the Romans. I started out a few days ago without knowing what to expect. It's just beautiful. Let's just take the square of the former Technical Town Hall.

This bright archway with its four female sculptures, which is wide and invitingly curved. I'd like to come in here. My favourite corner in the old town is a bit further ahead, in the direction of MMK. This mixture of stones and half-timbered houses at the corner of the Rebstockhof! For me as a placated person, the reconstruction of the old town brings the historical references of Frankfurt closer to me. What is wrong with feeling a little more at home here?

The historic old town was almost completely destroyed in World War II. Between 2012 and 2018 the “new“ old town quarter was built in the area between the cathedral and the Römer, which means that only parts of the old town were rebuilt or “creatively reconstructed“.

On my tour I started at the Rebstockhof. The discovery trail led me past a charming new café called Melange, to which I will surely invite all friends and relatives when they visit the city. But I can well imagine a business lunch there too.

Past a lingerie shop where two older ladies pondered about the possible target group of lingerie, the archway between a kind of inner courtyard with golden staircase leads directly to the cathedral, which now has the coffee house “Golden Scales“ as neighbours. The half-timbered structure of the scale was based on historical pictures. The furniture and decoration still originate from the 17th century.

These corridors at all - these close connections from one alley to the next - create a very peculiar, quiet atmosphere. For in the old town I move not only from “Behind the little lamb“ to the parallel situated coronation way, but step at the reconstructed “little golden lamb“ into an inner courtyard (see photo above), which forms the back of shops to Braubachstraße (flowers/evening fashion).

While I was taking pictures on my tour, one of these visitor bikes buzzed in with two Asians, “Photos please“, done. Another group listened eagerly to the explanations of the city guide on the architecture of the inner courtyard.

I was surprised by the number of museums that the old town now houses. Four of them. My personal favourite here?

The former Archaeological Garden, where young and old can marvel at the traces of the Roman settlement and the Carolingian imperial palace, excitingly explained by a video animation - or follow the coronation path of the kings and emperors on their way to the coronation.

I was surprised by the beautiful courtyards, inner courtyards and small corridors with the bright, bright colours. So the old town quarter looks more like it would consist of many small, self-contained cake pieces that form a large whole. And in every little piece there is something to discover, such as Brentano's poem at Market 40, at the House “To the Three Romans“. At the Hühnermarkt the Stolze-Brunnen attracts of course with a spring under it, which the Romans already tapped!

sounding house names and a lot of Romans - this is only a small, very short conclusion of my first, but certainly not last tour through the new old city. “The youngest old town in Germany“ like blasphemers. But I am convinced that this successful reconstruction will also convince the skeptics.

Do you have personal favourites in the old town? What do you want to see?

· The Inner Courtyard of the Golden Lamb

· Sculptures on a facade in Braubachstraße

Opening of the Old Town over three days with live music, information mile and theatre performances. Start: 28.09. 2018 from 18 o'clock. Highlight is among other things the drone show, as you can read here on Frankfurt-Tipp!