What is it about the Craft Beer? 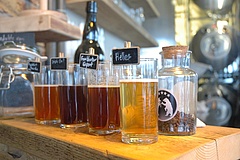 Dog or Cat? Beer or wine? I don't know what kind of guys you are, but my priorities are quite clear:  dog and beer ;-).  My beer taste has changed over the years. Where I come from, northern Germany, we prefer a cool Herbes. However, I grew up with you - and hold on: Export beer. So, now it's out. Laugh only!

Do you still drink the cheap beer like before? Certainly not, is it? Canned beer? Hm, nope. Rather, I have learned to love the pleasures of “Craft Beer“ in California, the delights of the spicy dark brew on Dutch beaches and Belgian cities. What fascinates me is that the taste of beer can now be as varied and exciting as that of wine. (But just as expensive.)

Beer liqueur and lemongrass? So the expert is amazed

A new beer culture has been spreading for some time. And that's a good thing, I think. The share of Craft Beer in the local turnover is only one (!) percent. But those who have discovered the new varieties for themselves will not want to let them go. I still dream of the wheat beer with honey that my favourite brewery, the Braustil in Nordend, once had on offer. In the meantime I have discovered the beer liqueur for myself. When the thermometer finally climbs to pleasant temperatures, you can spend relaxing evenings with delicious craft beer in the former gas station. (address below).

Where now the hype around the craft beer is pulling through the country, this month a Craft-Beer-Festival takes place again at Campus Westend, the question arises: What is it about this brew? Because translated from English it means nothing else than “Handwerksbier“ - pffff, but you can't get the German manufacturers with that. The monk laughs loudly in the Bavarian abbey and thinks of his centuries-old art of brewing from 1516. And in Frankfurt, too, people yawn tiredly. There is no denying, however, that Craft Beer is mixing up the business.

The new hop drink probably fits best into the category “Kraftbier“. It's got a lot of humming going on, anyway. Matured for nine months in a wooden barrel, it collects an alcohol content of up to ten percent. Lemon grass, orange peel or oyster water instead of hops, barley, malt and water - that's something to argue about. The best thing is to have a beer!

Whoever has a taste for beer now can either go to the Craft Beer Festival or visit their own tasting, which is now offered everywhere in Frankfurt.

What do you think of the beers? And where do you like to drink them?

send by e-mail
print
9 things in Frankfurt that cost nothing
Chicks, rabbits and Co. - 9 colorful ideas that arouse the ..