When a boat comes sailed - museum comes from leisure and muse 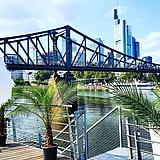 When a boat comes sailed and moors at the Iron Footbridge. It's called a "pop-up" in New German. One such boat was opened up on the Main in September, has white straw parasols stretched out on the upper deck, frog green sun chairs unfolded and two display boards in tow.

The Museum Judengasse has really come up with something to do museum work. Because it doesn't look like a museum for visitors at all, but of course, you get it: after the beach and sweet idleness. (I personally went on the boat for you and checked the relaxation character in detail.)

What is there to experience? After the usual bag check at the entrance, the guest can choose Tel Aviv Beach or the upper deck, with Israeli tapas and drinks at acceptable prices. (Coffee is available for less than four euros.)

And the museum also scatters its commitment. Or rather, his intention to ask visitors for their opinion. “What do you want from the Jewish Museum“ meets requests like “ the boat shall stay“, „ free Wi-Fi“ or „ love“ and „ More contact to the art scene in Tel Aviv“. The question was obviously met with lively interest, because the side of the boat was paved with many stickers.

The boat is very successful as an oasis of relaxation, but in fact it is already the first „exhibition experience“ of the Jewish Museum, which will one day enrich Frankfurt. In a six-week action, a place has been created to bring the idea for the new JM into conversation: based on the Jewish tradition of the tent or also the Laubhütte, in which the time of being on the move, more precisely the desert migration of the Israelites, is remembered, the Pop Cup boat anchors until the Laubhüttenfest at Schaumainkai.

Until 16 October, at 12 noon every day, visitors can expect a multi-faceted programme ranging from concerts to films, lunch talks, readings and more. Young government officials present their projects, authors report on their Jewish and growing up in Germany and thematize the Jewish perspective on feminism or the current refugee issue.

Ach, but in all seriousness music must not be neglected. Efrat Alony, La Bolshevita and Vocal Global Music show that Jewish music doesn't necessarily mean klezmer. Their sets are influenced by jazz, punk, hip hop, Balkan beats and electro. Well, isn't that exciting?

send by e-mail
print
The true Hessen test: What are coulters?
Pink Party or: Coffee party with sparkling wine and cupcak ..