The June Feeling in the City - Festivals and Summer Solstice 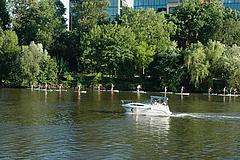 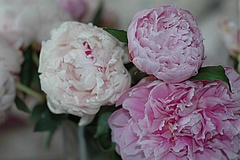 In Frankfurt it's all about summer. And by that I don't just mean the storms that rain down on us and keep us on our toes. And I don't just mean what's going on in the city centre. No, for me the real life is going on in the wonderful parts of the city: Sachsenhausen in the south, Bornheim and Ostend, Höchst in the far west or the newer district Riedberg in the north, just to name a few.

Yesterday evening I drove into the main station from Hamburg. And while we were thus waiting to enter, the skyline loomed behind the station. Like a tourist, I didn't miss the chance to capture this image. And the moment my feet stepped onto the platform, that feeling was there: Home.

What makes the feeling of home grow for me is Frankfurt's neighborhoods with their such contrasting characters. Since I spend a lot of time in the Ostend for work, I have noticed the changes there in particular. A new corner pub just opened on Windeckstraße, with cool chairs and chic wallpaper on the walls.

So there's a lot going on in the districts!

&middot; When the roses bloom, a famous pop duo once warbled in the 70s. And where do they bloom? In the Palmengarten, of course. The queen of flowers showed herself again this year in Frankfurt's most beautiful garden in all her variety, colourfulness and scent variation. Thousands of roses beguiled for three days with their scents and colors, reminding us that rose shows were already part of the very first exhibitions of the Palmengarten.

This splendor is prepared and planned in painstaking effort of the Palmengarten staff for a long time and then can be marveled at only for a short time - of course, as every year with the great Rose and Lights Festival, which attracted many thousands of visitors last Saturday despite the rain.

&middot; The big meal on Food Truck Friday once again lures you to the Jahrhunderthalle in Höchst, where the very latest trends await you. On four summer dates we can feast on poutine (Canada!), churros and much more. It starts right this week. Ideal to bridge the gap between the World Cup kick-off on Thursday and the German game on Sunday against Mexico :-)
If you're wondering what "poutine" was again, and you like fast food and fries as much as I do, I've blogged something delicious in "Frankfurt - hot and greasy", no, not cooked, but blogged.

&middot; To all those who, like me, have a cozy apartment but neither balcony nor terrace, I recommend Villa Kennedy's Terrace Festival. In Frankfurt's "most beautiful courtyard" you can celebrate the summer at an eclectic antipasti buffet with the best of Bella Italia and numerous live cooking stations with tempting Mediterranean delicacies. Of course, the one or other glass of iced wine will not be missing. A live band will ensure a holiday atmosphere, so that nothing stands in the way of an exuberant summer evening under the open sky.

&middot; That would prepare us, so to speak, for the calendrical start of summer on June 21, when we will not only celebrate the summer solstice, but also the International Yoga Day celebration.

How about celebrating the longest day of the year with a summer "Solice" at Yoga in Holzhausen Park, practicing calm and mindfulness? Bring a mat/large towel, water, something to throw on for final relaxation. The latter in particular is important to me because I tend to grate away during the final relaxation. Even more than 20 years of practicing yoga haven't been able to prevent that :-)

So, those were my June favorites now, with which I like to indulge in the summer. But, because as you know "every Jeck is different" as my Cologne mother-in-law never tires of pointing out J, I'm interested in what you usually do in June? Also, of course, you'll always find the very best ideas here on Franfurt-Tipp!!!