The New Year's Eve Crasher - Celebrating Over the Rooftops 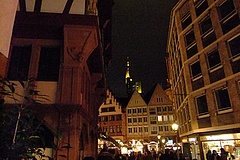 Every year the calendar gives us an end of the year, and just as humanity divides into dog lovers and cat lovers, so it is with the last day of December: some ramp up what the firecracker industry has to offer, others grumpily mutter something about "in bed by 10 p.m." My attitude? Neither. More of a third way, in keeping with the desire to simply spend the day or evening as nicely as possible. I love traditions, after all, and I especially cherish the second "between the years" with fervor. Even when I was working in an office, working was more relaxed and the week is like no other, a kind of "twilight zone". The best New Year's Eve I celebrated was during my time in California: in San Francisco with five friends. As a student we spontaneously stayed in a motel without towels and welcomed the new year with a six-pack of beer near the Golden Gate Bridge. Since then, deep relaxation has set in and with the appropriate serenity I have chosen from the rich offer what I would like to see next Wednesday in Frankfurt: Have I already told you about my weakness for skyscrapers? No, then I must make up for it here next year...

*Now our beautiful city offers us the luxury of the tallest European skyscraper. Which one is that? The tower of the Commerzbank. Only open to the public once a year at all. Is this an opportunity? "Dining & Dancing" overlooking the nightly fireworks and city lights. (<link http: www.silvester-deluxe.com _blank>Www.silvester-deluxe.com)

Or would you rather stir fondue at home with friends and head downtown for the fireworks?

At the Operplatz all hell breaks loose at midnight as well as at the Mainufer, where at least one hour before party people on the section around the Eisernen Steg to the Obermainbrücke (height Römer to Literaturhaus/Konrad-Adenauer-Straße) already let the party rise.

In this sense a hopefully successful Happy New Year! Looking forward to seeing you again in 2015.