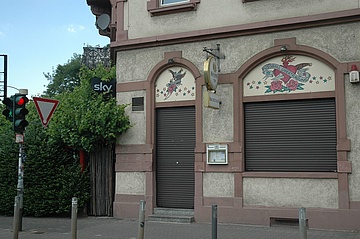 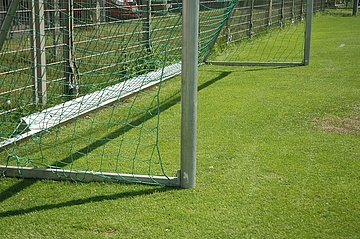 Just under 14 days to go and then it's back to exceptional circumstances: some rumblings (Fünf Tipps für Fußballmufffel), but most don't want to miss a thing when Germany competes in Russia to defend its World Cup title from June 14 onwards. Today I have to come to you with an old wisdom from the football world, which is that the round has to go into the square. That's just as certain as the fact that watching football alone is rarely fun.

For me, the motto is: A sorrow shared is a sorrow halved, and a joy shared is a joy doubled.

By watching football together, however, I don't mean staring en masse at a giant screen on one of Frankfurt's squares. Whoever likes that, be my guest. I prefer to watch in a beer garden or in a pub: Manageable crowd, plus delicious food and drinks - can there be anything better? Provided the right team wins the game in the end ;-)

Watching football in the pub: Handkäs, atmosphere and delicious beer

I once watched football at home for a while. And what can I say? It went totally wrong. The atmosphere was completely different, I didn't even know where to put my excitement. Because "I do care, it upsets me" - free quote ending. Or I channel my nervousness by cleaning up the joint, which is not the height of sociability now. So I do prefer to watch football with friends and acquaintances in an atmospheric pub.

"Irish Pub/ Obere Berger Straße", 60385 Frankfurt - Of course, there is no way around the beloved classic "Irish Pub" and Bornheim. For the football World Cup, the entire upper Berger Street turns into a single football mile. Pub after pub with rustic half-timbered windows, in which landlords put wide screens.

"Birmingham Pub", Battonnstraße 50, 60311 Frankfurt - This nice pub offers international food and a nice atmosphere. I'm a vegetarian, but I've heard from people in the know that this cozy pub serves really tasty currywurst. :-)

The North to the power of two, Sandweg, Frankfurt. Well, cough, football fans from northern Germany have been a bit hammered since HSV's relegation. But atmospherically, the North German enclave on the Main leaves nothing to be desired for all lovers of the German coast and Frisian. The bar is full of details like sailor pictures and serves Astra beer.

Depot 1899, Textorstraße, 60594 Frankfurt. What a setting in the former tram depot in Sachsenhausen. Typical Frankfurt cuisine in a casual atmosphere and beautiful ambience!

Backstage, Rothschildallee 36, 60389 Frankfurt - Need I say more about the regular pub of Frankfurt Eintracht, the current winners of the DFB Cup? Here you can watch football, schnitzel, rock &sbquo;n' roll.

You can find even more locations here. In whichever pub you watch, remember to make a reservation in time!!!! And if you haven't heard about the Soccer-Jacket yet, you can read more about it on Frankfurt-Tipp Aktuelles.

What belongs to watching soccer for you? Where do you like to watch?

send by e-mail
print
Waffles, bike and stock exchange - Dutch moments in Frankf ..
The June Feeling in the City - Festivals and Summer Solsti ..