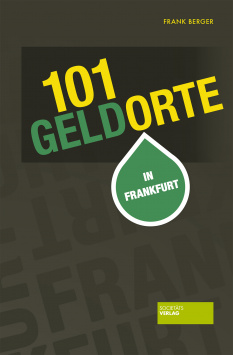 No question, Frankfurt is Europe's financial metropolis par excellence. Money plays an enormously important role here, which is not only manifested in the seat of the ECB. There are many places in Frankfurt that directly or indirectly have something to do with money, although this is not as obvious for everyone at first glance as it is for the stock exchange or the seat of the European Central Bank. In the tradition of the successful "Unorte" trilogy, Frank Berger presents such places in "101 Geldorte" in Frankfurt and invites you to a highly exciting journey through the history of money in the Main metropolis.

The reader learns about the importance of the monkey houses, discovers the treasure of gold under the Old Bridge, learns about the Hotel zum Schwan (Swan Hotel), where the bookstore Hugendubel can be found today, or can pay a visit to the Pension Tower. In addition, the book explores counterfeiting in Allerheiligengasse, looks at the Old Stock Exchange at Paulsplatz and reveals why the Römer subway station is paved with money.

As a Frankfurt citizen, you will always come across places where you often walk past without really knowing what significance they have for the city as a financial metropolis. It's not necessarily the big banks, but the small, hidden places and their sometimes quite bizarre, exciting or simply surprising stories that make this book a perfect sequel to the "Unorte" series. It's fun to read through the short, very entertainingly written texts on the individual money locations and thus discover new facets of your hometown.

Whoever liked the three "Unorte" books and was interested in the history of Frankfurt as a city of money, can't avoid this somewhat different city guide. Absolutely recommendable!