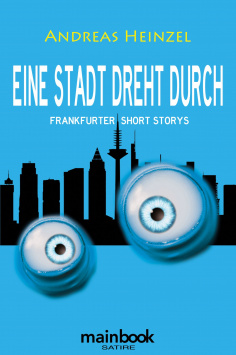 Frankfurt - a city of diversity, a chic mix of traditional and modern with many places full of culture and conviviality. But behind the beautiful facade, things are boiling violently. Many a deep abyss opens up here - morally, humanly and socially. Sounds terrible? It is - terribly entertaining! At least in the way such abysses are described by Andreas Heinzel. With "Eine Stadt dreht durch" Heinzel has published his first collection of satirical short stories after two novels. And they don't exactly show Frankfurt and its people from their most positive side. They are wicked, humorous and enigmatic. Some of the stories may seem a bit overdrawn, but at the core there is usually a whole lot of truth. That's why the stories often make you not only laugh or smile, but also think.

Heinzel has packed a lot of local color into the book. So the Berger street festival, the Eintracht, the city center or the Ebbelwoi play a major role. At the same time - and this is a particularly successful aspect of the book - the stories are very universal. The fact that housing shortages and rent madness can take on absurd proportions is not only known in Frankfurt. The same applies to disputes in allotment gardens or the rampant envy of fellow human beings after a (supposed) lottery win. So the stories work both as Frankfurt short stories, but also as quite general social satire.

In some of the short stories it seems very obvious that the events described in them are badly exaggerated. But on reflection they don't seem so far-fetched after all. For example, the way in which some Frankfurt residents are desperately struggling to find a new flat could perhaps become reality in a similar form at some point in the future. And the suggestions of a particularly resourceful marketing expert on how to change Frankfurt's image might not be so bad for some of his real-life colleagues. Other stories, like that of a father and his soccer-playing prodigy, are pretty darn close to reality, which actually adds to the reading pleasure.

Although all the stories are actually convincing, there are some that just seem more intense than the rest. This is especially true of the first story, which is so delightfully wicked and weaves love for Eintracht into the proceedings in a particularly original way. But also "Der Flügelschlag des Schmetterlings", where it becomes clear how an annoying passenger can throw an entire city into chaos, is one of the highlights of this book, in which the everyday madness in Frankfurt is wonderfully exposed. So if you like it cryptic and grotesque, funny and at times really nasty, you should not miss "Eine Stadt dreht durch". Absolutely worth reading!