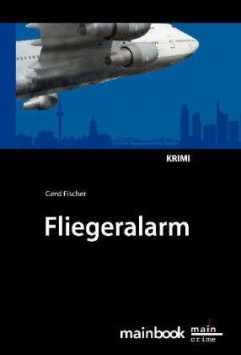 Monday demos, legal disputes, desperate appeals from troubled residents, countless TV and newspaper reports: since its commissioning, the new northwest runway has changed life in and around Frankfurt  - and often not for the better. The economic importance of Frankfurt Airport for the entire Rhine-Main region is beyond question. But the price that many residents have to pay is too high not to have to look for a more bearable alternative. In view of the considerable increase in aircraft noise and the destructive consequences of so-called wake vortices, it is more than understandable that those affected should revolt in such a way against those responsible from industry and politics. All this controversy, with all its explosiveness, provides the perfect material for Commissioner Rauscher's sixth mission, which is now available with Gerd Fischer's latest novel "Fliegeralarm".

In fact, Commissioner Andreas Rauscher wanted to marry his girlfriend Elke in peace and harmony and then enjoy his well-deserved holiday. But then, even before he can say yes, he is recalled from the altar to Bockenheim for an alleged suicide attempt. Then a cut off ear with a letter of confession appears, which demands an end to the aircraft noise. But whose ear is this? And is the attempted suicide of the young woman from Bockenheim somehow connected with this? And who is the woman who, shortly before her fall, expressly asked for Commissioner Rauscher? And will Elke ever be able to forgive him for leaving her at the altar? Rauscher is facing turbulent days, the starting point of which goes back to the demonstrations around Runway West in 1987.

"Fliegeralarm" is a very entertaining thriller that mixes facts with fiction in a cleverly constructed story and spices the whole thing up with a good portion of local color. Rauscher's penchant for Ebbelwoi alone - which was his cradle, so to speak, with this surname - should always make many people in Frankfurt smile with amusement. But also the very descriptive, but not too intrusive descriptions of the locations ensure that the novel is given its very own Frankfurt flair.

Why the novel really works well, however, is the way in which Fischer combines facts about aircraft noise with a fictional story to create exciting reading material. In doing so, he succeeds very vividly in making the burden that the never-ending noise exerts on the affected residents comprehensible even for those readers who do not live in the direct approach lane. Even if the consequences may be somewhat exaggerated (which is absolutely necessary for a detective story), the whole thing seems extremely realistic and somehow oppressive.

The fact that the story, despite an already quite clear positioning, tries again and again to shed light on both sides and that the arguments in favor of the northwest runway are also incorporated, contributes to the positive overall impression of this Frankfurt detective story. In any case, Fischer has found a very balanced tone, which gives the book on the one hand a certain thematic explosiveness and thus also a pleasant depth, but which never lets the story become a pure political issue, but always puts the entertainment value right at the top. And this "air raid alarm" is always entertaining. So anyone who wants to deal with the subject of aircraft noise in a different way, appreciates crime thrillers with Frankfurt local colour or already liked the first books about Commissioner Rauscher should definitely take this opportunity. Recommended]