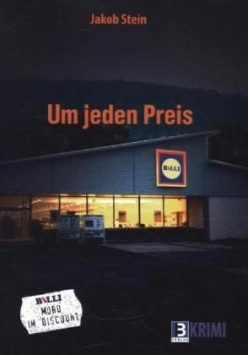 At any price - murder at a discount

A new BILLI supermarket is about to open in contemplative Nieder-Erlenbach. Not all residents of the Frankfurt suburb are particularly pleased about this, yet the construction of the discount market was not disturbed by major protests. But just on the day before the grand opening, two employees are found dead. Graffiti on the outer façade initially suggests that this could be a protest action that got out of hand. But the very first investigations raise many questions that lead Chief Inspector Martin Schwaner and his team in ever new directions. Maybe this is just a relationship thing you're dealing with? Or is the perpetrator perhaps to be found in local politics after all? The solution to the case seems to hide somewhere in an almost impenetrable web of political and economic interests. But of course Martin Schwaner won't be discouraged by that...

"At any price" is Jakob Stein's second Frankfurt thriller after "Doppelmord". While the first case of Chief Commissioner Martin Schwaner, with the Kleinmarkthalle as the crime scene, was still located directly in downtown Frankfurt, this time it is to Nieder-Erlenbach. But anyone who believes that things are more tranquil here than in the centre of the Main metropolis is seriously mistaken. Even if Schwaner and his girlfriend, the forensic doctor Sandra Thielacker, walk through an almost ghostly quiet suburb in comparison to Alt-Sachsenhausen, this idyll is more than deceptive. The different directions in which Schwaner and his colleagues are led show that jealousy, frustration, greed and bribery prevail behind the bourgeois façade and that even a small suburb like Nieder-Erlenbach Frankfurt is in no way inferior when it comes to crime.

In addition to the actual investigative work, the book also takes time to let the characters engage in interesting discussions about the benefits or harms of large discount chains for the retail trade, especially outside the city centres, or to briefly address the Blockupy movement. This and the small insights into the private life of the main commissioner give the crime thriller additional spice, which is garnished with a pleasant pinch of local colour. In the descriptions of the actually existing places in Frankfurt and Nieder-Erlenbach, Stein proceeds in his second book somewhat more discreetly, but precisely because of this more effectively. Thus he builds up a harmonious atmosphere, which should give readers with local knowledge a lot of pleasure, but which can also be enjoyed by such crime thriller fans, who are hardly or not at all familiar with Frankfurt and its suburbs.

"At any price" is a very entertaining crime thriller, which can be read pleasantly and which one, like "double murder", literally devours. Of course some typical clichés of the subject are served. And even though the relationship between Schwaner and Sandra Thielacker is moving a little bit, the figures could have taken a little more development. But this is a high level of moaning, because the bottom line is that the book not only fulfils its entertainment mission perfectly. It is also possible to think longer about many aspects of history and discuss them well. So if you're simply looking for good thriller entertainment with a little Frankfurt flair or if you're in the mood for new Schwaner cases after a "double murder", then "Um jeden Preis" is a real bargain. Recommended]