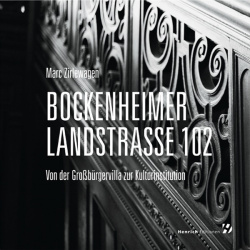 From a big bourgeois villa to a cultural institution

The fact that a big city like Frankfurt is in a constant state of flux is an unavoidable necessity, which also has a positive effect on the cityscape in many respects. But whenever an important cultural institution, a striking building or a place close to the hearts of many people has to make way for change, change is always accompanied by a lot of melancholy. In other cases, on the other hand, constant change can free the city from unpleasant building sins. However, it is always important not to lose sight of tradition in the face of all changes. Because many buildings have a meaning that goes far beyond the architectural. What has happened in a building can thus be of greater significance for the history of the city and thus also for the current cityscape than its perhaps no longer entirely contemporary architectural style. It is important that such houses do not simply disappear into a blind frenzy of change, as they represent an important mirror for the history of the city.

An own book has now been dedicated to such a house with "Bockenheimer Landstrasse 102". For the history of the building, which most people are likely to know as a former house of literature, is so multi-faceted that it also reveals many important milestones in Frankfurt's city history over the last 100 years. In order to be able to understand this better, the book first of all illuminates the upper middle-class villa culture in general, from its beginnings to its downfall. Not only the representational function of the outer façade is dealt with, but also the function of the individual rooms in the interior. A very interesting chapter followed by a foray into the history of Bockenheimer Landstraße. Before we actually get to the house with the number 102, we first introduce its creator, the architect Alfred Engelhard, and his work as well as its significance for Frankfurt and Offenbach in more detail.

Then we go to the villa to which this highly interesting book is actually dedicated. The interesting, very complex history of the house is discussed in detail in the following chapters, whereby the memories of Eva Sondheimer-Stroh, who spent her childhood here, are particularly exciting to read. Supported by numerous archive photographs, documents or drawings of the use of space in the various chapters of the house's history, the route to Frankfurt's important cultural monument is traced. The whole is rounded off by very atmospheric photos documenting the current vacancy of the historic villa.

The book thus provides the reader with an excursion into a piece of Frankfurt's contemporary history worth reading and seeing, represented by a house whose significance for the history of the city most people will only be fully aware of after reading "Bockenheimer Landstrasse 102". In addition, the book makes it a great pleasure to take a closer look at Frankfurt's city history and the future of the former house of literature. For all who are interested in very special aspects of the history of the city and in the upper middle-class villa culture, this book is absolutely recommendable!