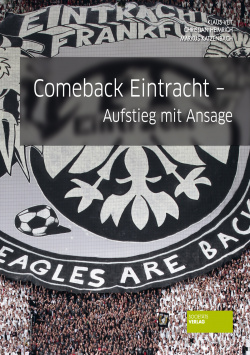 When Frankfurter Eintracht was allowed to play in the first league again after their third relegation to the 2nd Bundesliga for the 2006/2007 season, the fans sang out of complete conviction: "No more second division"! A dream that unfortunately was not to come true. Also the season 2011/12 was the Eintracht again second class. But the descent should not be permanent. In their book "Comeback Eintracht - Ascent with Announcement" Klaus Veit, Christian Heimrich and Markus Katzenbach trace the club's path to a truly spectacular ascent. The three authors, who as sports editors of the Frankfurter Neue Presse were firmly convinced that the fourth visit to the second league was only a short flying visit, have documented the entire season with all its ups and downs and thus offer the fan not only a thrilling insight into an exciting season, which, even after almost fifty years, finally once again had to offer a derby between Eintracht and FSV Frankfurt. There will also be an interesting look behind the scenes of contemporary professional football, with not only hymns of praise but also very critical remarks.

What makes the book so recommendable, besides the interesting texts, the statistical information and the match analyses, are the numerous photos taken during the training camps, at press conferences as well as during (and after) the matches on the pitch and in the fan curve. Some very intense snapshots were captured, documenting not only the glorious moments of the season, but also unpleasant aspects such as fan riots, disputes and defeats.

The sentence "Whether the eagle is about to take off for another high-altitude flight, that's what the future has to show", with which the book ends, is what one would like to see after the brilliant start into the new first league season in "That the eagle is about to take off for another high-altitude flight was of course to be expected in exactly the same way". But whether this flight of fancy will continue will only be seen in the future. But the fact is that the "ascent with announcement" was more than successful, which makes this book all the more worth reading. If you follow how the traditional club fought its way up from the basement and how much the support of the fans has been even in the not so pleasant times, then every victory in the first league can be celebrated all the more beautifully. Therefore this book can be warmly recommended to every faithful fan of Eintracht. Recommended]