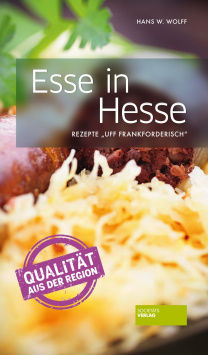 Hessian cuisine has much more to offer than just handmade cheese with music or green sauce. In his latest book "Esse in Hesse", dialect specialist Hans W. Wolff ("Herzhaft Hessisch") takes his readers on a culinary journey through the multi-faceted federal state, presents delicious recipes from the region and tells amusing anecdotes on the subject of food - and, of course, always particularly tasty "uff French".

The recipes, as long as the reader of the dialect is powerful, are not only easy to understand, but also very charming and humorous. Reading the book is a lot of fun, which lays the perfect foundation for a pleasurable stroll through Hessian cuisine. The very colourful range of recipes extends from hand cheese salad with Äbbelweibrot to "Micha`s Hardcore-Leberkäs", Odenwälder Schnegge-emies ragout or Limburger Säcker to Ribbscher with cabbage and veal knuckle with Frankforder Grie Sauce. But also sweet specialities like Frankforder Bethmännscher, Frankforder Kranz or Krebbel should not be missing here. Nearly 30 recipes reveal the versatility of Hessian cuisine and ensure that this book is also a great culinary pleasure.

However, this is not enough. Hans W. Wolff also presents his readers with a crash course in kitchen Hessian, explains the special relationship of the Hessians to their aegis, tells culinary stories from "kallorieaame Zeide" or takes a look at grandma's cookbook. And finally, he also invites the readers to put their newly acquired knowledge to the test in a "Esse in Hesse - Quiz". All this happens as one is accustomed to by Hans W. Wolff - true to the title of his book "Herzhaft Hessisch" just.

"Esse in Hesse" is an extremely entertaining book, which not only can prepare great culinary delights, but also flatters the laughter muscles. A charming, lovable, humorous and tasty work that lovers of Hessian cuisine should not miss. Absolutely recommended!